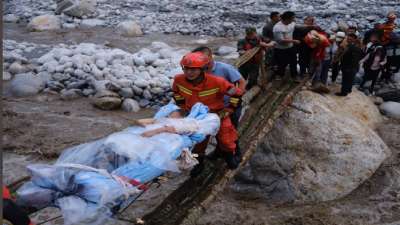 The death toll in this week's devastating earthquake in western China has risen to 74, with 26 people still missing. The government gave this information on Wednesday. Lockdown is in force in the area due to Corona virus infection and people are not allowed to come out of their homes despite feeling the tremors of the earthquake, which has caused a lot of anger among them. A 6.8-magnitude earthquake struck Luding County in China's southwestern Sichuan province on Monday, damaging houses in the Ganje Tibetan Autonomous Region and shaking buildings in the province's capital, Chengdu.

There are more than two crore people living in strict lockdown. After the earthquake, the police and health workers did not allow troubled and panicked people to leave their homes, due to which people's anger about the country's Covid policy has increased.