The 88-year-old  said he may fight Kerala elections if the Party wants. Though the cut-off point for contesting elections in BJP is 75 years and has been previously applied on the party veterans like L K Advani and Murli Manohar Joshi. 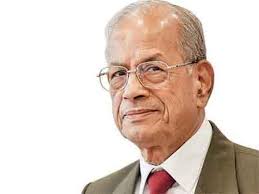 Former Delhi Metro Chief E Sreedharan said he will join the Bharatiya Janata Party (BJP) ahead of Assembly polls in Kerala. Mr. E.Sreedharan, former Metro Rail Corporate Man has indicated that he will join BJP ahead Assembly Polls in Kerala, “I have decided to join the BJP, just official formalities remain," he confirmed from his hometown in Malappuram. He may join the party during the Vijay Yatra in Kerala from Sunday.

The 88-year-old “Metro Man” as he is fondly called, for being responsible for spreading the metro lines in most parts of India under Congress approval and regime, well ahead of its deadlines most of the times, says he is ready to fight Kerala elections due in May “if the party wanted”.

However, notably, the cut-off point for contesting elections in BJP IS 75 years and has been previously applied on the party veterans like L k Advani and Murli Manohar Joshi.

Notably, the BJP has one MLA in the 140-member Kerala assembly. It is considered a small player compared to the ruling Left-led alliance and the opposition Congress-led coalition.

On being asked why he chose the party to join at this age, he said, "I have been living in Kerala for the last 10 years, since my retirement. I have seen different governments and they are not doing what can be done for the people. I am joining the BJP to be able to do my part, using my experience," he said.

However, inside sources say that he may hold an advisory position in the party.