During Musk's appearance on the programme, the valuation of Dogecoin, which had risen to the fourth largest cryptocurrency in terms of market capitalization after a jump on Saturday, plummeted to as low as 51.5 cents. 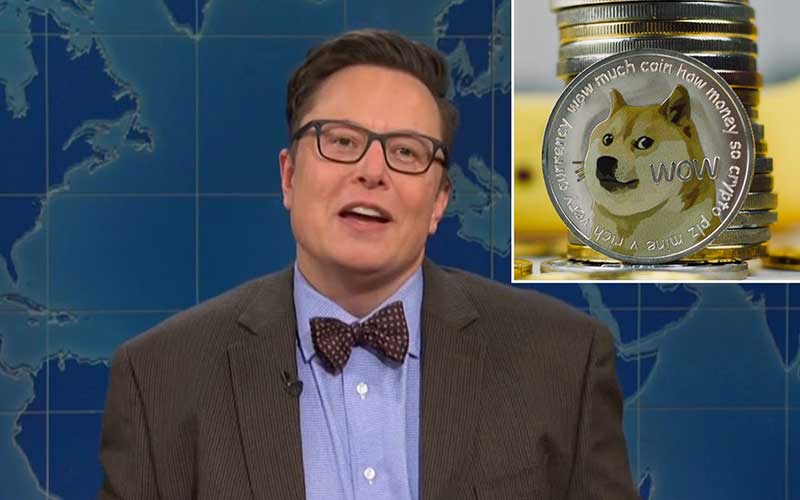 During Elon Musk's performance on "Saturday Night Live" Dogecoin retreated from a high hit earlier in the day, continuing a downward trend. As Tesla CEO Elon Musk delivered his monologue on the legendary American show, the price of Dogecoin collapsed by as much as 23%.

On Friday, ahead of the show, Musk pushed the popularity of Dogecoin to an all-time high by tweeting a photo of himself with a ‘Shiba Inu’ puppy, the dog that is the logo of Dogecoin.

The value of Dogecoin soared to 73 cents on Friday and Saturday, giving hope to the possibility that the ‘meme crypto' could hit a dollar. However, Dogecoin's worth plummeted after his appearance on Saturday Night Live.

During Musk's appearance on the programme, the valuation of Dogecoin, which had risen to the fourth largest cryptocurrency in terms of market capitalization after a jump on Saturday, plummeted to as low as 51.5 cents.

According to CoinGecko, the cryptocurrency has lost 23 percent of its worth in the last 24 hours, falling to about 55.6 cents (12.56 PM HK).

As per CoinGecko, Dogecoin, a cryptocurrency that began as a gag in 2013, has grown by more than 20,000 percent in the last year. Along with Mark Cuban, Snoop Dogg, and Gene Simmons, Musk has been a vocal supporter of the 'meme crypto'.

During Musk's opening monologue, when his mother, Maye Musk, joined him on stage, a reference to Dogecoin was made. Maye expressed her enthusiasm for her Mother's Day present, saying she wished it wasn't Dogecoin, to which he replied, "It is."

During the broadcast, dogecoin supporters flocked to Twitter in droves, and live streams on YouTube were dedicated to both viewing SNL and tracking dogecoin's movements simultaneously.

Here is the link shared by Elon Musk on his Twitter handle to view the NBC show- ‘Saturday Night Live’.