Both are very active on social media and are sharing their vacation pictures with fans. The romantic style of Rahul and Disha is being seen in the pictures. 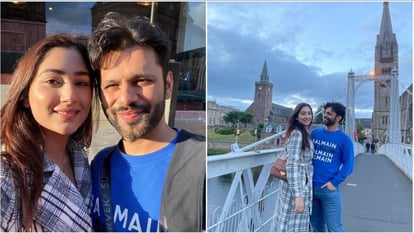 Famous television actress Disha Parmar and singer Rahul Vaidya are one of the cutest jodis of telly town. The marriage of both is going to be completed in a few days. In such a situation, the couple has reached London to celebrate their first wedding anniversary.

Disha is doing 'Bade Achhe Lagte Hain 2' these days, from which she has taken a break for a few days. In an interview, Rahul Vaidya had confirmed that both are going to London for 10 days. Now both of them have done a lot of pictures on Instagram, in which both are looking very romantic. In some picture, Rahul is looking at Disha, while in another both are looking into each other's eyes. Fans are also very fond of the pictures of both.

Rahul Vaidya and Disha met for the first time during a music video, after which the two became friends and then fell in love. At the same time, Rahul proposed Disha for marriage from Bigg Boss house. After this Disha gave her answer by coming on the show. After coming out of the show, both of them got married on 16 July 2021 in the presence of their family and friends.