His family members confirmed to TNB that “he is doing better and he is in ICU and is under medical observation. He was admitted yesterday noon following breathing troubles." 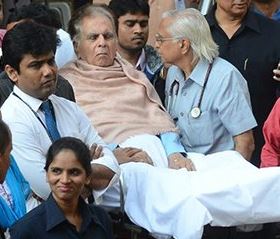 Yusuf Khan alias Dilip Kumar has been hospitalised again following breathing issues. Admitted at the Hinduja Hospital, Mumbai, following breathlessness again nearly 12 days after he was relieved from here and “was doing fine” the medics told the press.

The “King of Tragedy” as he is known, has been fighting age-related ailments for quite some time; nearly a decade. His wife, Saira Banu, has been with him like a shadow and his updated pictures of health are posted regularly by a family member Ismail Khan on his fan page.

However, his family members confirmed to TNB that “he is doing better and he is in ICU and is under medical observation. He was admitted yesterday noon following breathing troubles.”

The King has been made to meet several top notch film stars such as Shah Rukh Khan, Amitabh and Jaya Bachchan and many more with a good gap as they go to his home in Pali Hill, Mumbai to check on his health. 'The Legend' Kumar as he is also known among his peers, is made to get ready, wear subtle shades of kurta-pyjama, photographs are clicked which are then posted on select handles of Dilip Kumar / Yusuf Khan and shared with the public to keep them updated about his health.

This is to be noted that 'the legend' Khan was fighting property issues for some time in the last few years. The couple were engaged in a dispute with city-based builder Sameer Bhojwani over the ownership of a bungalow at Pali Hill in upmarket Bandra suburb of Mumbai. The Bunglow worth Rs.250 crore as claimed by Bhojwani, was his. This was in late 2017.

Taking objection to this, Khan and his wife had sent a defamation notice to Bhojwani on December 31, 2018, for "misleading public with false and defamatory statements." They sought Rs.200 crore as damages. The battle concluded after the legal heir of the property's original owners, Sunit Khatau, a beneficiary of the Seth Mulraj Khatau Trust Settlement, issued a public notice later, stating that the trust was its owner and that "Dilip Kumar was a perpetual lessee of the property for a period of 999 years".

After a long legal battle of nearly three years, Khan got back his house but the fight drained him down. His wife noted actor of her time, who almost left cinema decades ago, has been his shadow and following a totally Islamic way of life. Her home looked like a revered mosque where prayers would happen almost the whole day for the recovery of his ailing health and victory over issues she thought her husband wasn’t wrong on.

This information was given to me by Saira aapa (as I address her) herself while she refused to name any enemy. She just told me, “Please pray that we come out victorious as we are on the right path. We don’t want anyone’s harm. We have left our matters to Allah and only Allah”.

This was nearly 3 years ago.

Nearly 22 years younger, Ms. Banu has been a constant source of strength for Khan. She has dedicated her entire life to him and his well-being as is also known in the film industry sources. For past few years, after the battle, she had agreed to post updates about Yusuf Khan sahib on social media.