The air quality index (AQI) of the capital was on Thursday inching closer to the 'very severe' category due to stubble burning and stable atmospheric conditions, prompting authorities to operate diesel-powered four-wheeled light motor vehicles (LMVs) in Delhi and NCR districts. 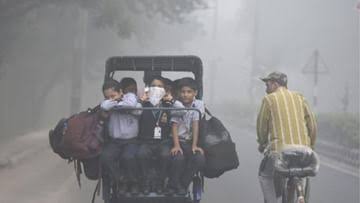 Schools of classes 1 to 8 have already been closed in Noida after air pollution reached alarming levels in Delhi NCR. Now other schools of NCR may also be locked in pollution. Delhi's air pollution has reached 600 AQI on Friday. Due to this, breath has been guarded in the capital. There are many cases of lung infection being reported. Young people including children are also facing shortness of breath. In such a situation, Chief Minister Kejriwal has also closed the primary schools of Delhi. All their outdoor activities will also be closed.

Earlier in the wake of severe air pollution in the national capital, the Delhi unit of the Bharatiya Janata Party (BJP) on Friday demanded the Aam Aadmi Party (AAP)-led state government to order closure of all schools in Delhi. Addressing a press conference at the Delhi BJP office, the party's national spokesperson Shahzad Poonawalla said that the AAP government should close all the schools while playing with the lives of the children. Poonawalla said, "Chief Minister Arvind Kejriwal, who is acting as a part-time chief minister of Delhi, should tell the people what steps his government has taken to check pollution in the city. After this, Kejriwal has closed schools up to primary.

Delhi BJP President Adesh Gupta said that if the Kejriwal government does not issue an order to close all the schools, then the party will protest on the streets. The air quality index (AQI) of the capital was on Thursday inching closer to the 'very severe' category due to stubble burning and stable atmospheric conditions, prompting authorities to operate diesel-powered four-wheeled light motor vehicles (LMVs) in Delhi and NCR districts. Directed to ban the operation of vehicles and entry of trucks in the national capital. The step has been taken as part of anti-pollution measures under the final phase of the Graded Response Action Plan (GRAPE).