The Delhi government has informed the Court that Haryana has not taken any meaningful steps to resolve its concerns about untreated contaminants being discharged into the Yamuna River, triggering an increase in ammonia levels and the release of inadequate water, resulting in a reduction in supply in some areas. 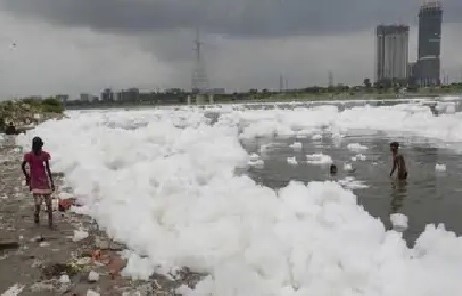 The Government of Delhi has informed the Supreme Court that Haryana has not taken "any concrete" step done its job to tackle the complaint of over-filling of "untreated contaminants," which has led to the increase of Yamuna's ammonia levels and the release of inadequate water in some areas.

In response to Haryana's and his Department of Irrigation and Water Resources' reply, the Aam Aadmi Party government has submitted its rejoinder affidavit in the Apex Court.

The Haryana government and others were ordered, on 26 March, by a bench led by Chief Justice S A Bobde to continue the status quo for the supply of Yamuna water to Delhi by showing that it should not be reduced to a national capital that has to be dealt with.

The AAP government, which in January of this year had moved its highest court via the Delhi Jal Board (DJB), sought instructions for Haryana to stop unprocessed waste from being released into the Yamuna and to release enough water to the national capital facing a possible crisis.

The rejoinder affidavit, filed by the Chief Engineer of DJB, M K Hans, called the full response of Haryana and her department "a shadow exercise."

"It is an exercise in dysfunction in which the respondents No. 1 and No2 (Haryana and its department concerned), taking advantage of their geographic position as an upper riparian state, effectively seek to claim the right to pollute the Yamuna.

The response as a whole indicates absolutely no attempt by Respondents No. 1 and 2 to take concerted action to deal with the release of untreated contaminants that increase ammonia levels in the Yamuna River," said the Delhi government's declaration of 26 pages in a statement. It stated that the Delhi administration had moved the Top Court in view of the "water crisis in the national capital," and it held that "the right to clean and sufficient drinking water is part of the right to life under Article 21 of the Constitution" on a number of occasions.

Haryana has plenty of potable water, and drinking water per person is far higher than Delhi's and is a high-river state served not only by the Yamuna River, but also by numerous rivers.

"Due to continuous action/inaction of Respondents no. 1 and 2 in many areas supplied by Wazirabad, Chandrawal and Okhla Water Treatment plants and with an effect on the right of Delhi NCT residents to clean and sufficient potable water on a large scale reduction of up to 30%.

On 6 April the apex court postponed the Delhi administration's appeal hearing. The DJB submitted in its application that the government of Haryana had reduced supplies of raw water to Delhi, resulting in a shortage of the national capital water supply.

The Deutsche Justiz Bank (DJB) had stated that the Yamuna and Wazirabad dam, which supplies the water treatment plants in Wazirabad, Okhla and Chandrawal, could be experiencing a possible serious water crisis.

Raw water comes from the Yamuna, drawn from the dam in the Wazirabad, adding that quantity and quality are conditional on the Haryana administration's release of water.

The Carrier-Lined Channel (CLC), Delhi Sub-Branch, DSB, and Yamuna supply water to Delhi. The CLC and DSB supply Hathni Kund water through the Munak channel and the Bhakra Beas Board of Directors.

On 13 January the Apex Court said that pollution-free water is an essential right that a welfare state is 'bound to ensure.' The Centre, CPCB and five countries like Delhi and Haryana issued notices in this respect.

While appointing senior advocate Meenakshi Arora as amicus curiae, the Supreme Court ordered its registry to file the suo motu case as 'Remediation of polluted rivers,' and stated that it would first address the issue of Yamuna river pollution.