Delhi government vs LG: Uproar in Delhi Assembly, all BJP MLAs marshalled out

The government has a clause that 80 per cent of the old employees have to be retained, but this does not happen. There is huge collection of money in this." 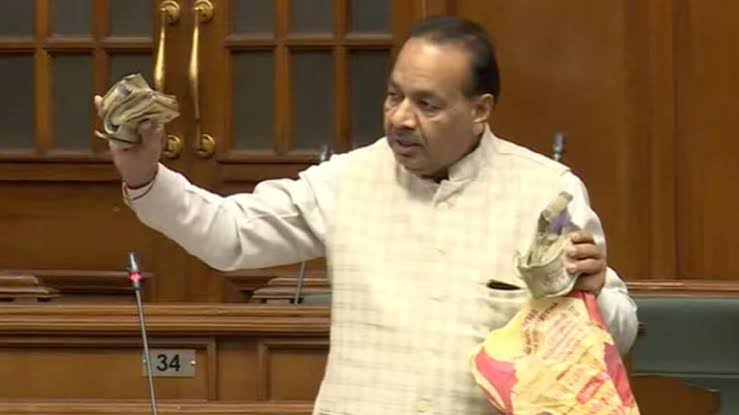 As soon as the proceedings of the Delhi Assembly started, there was an uproar in the house. The MLAs of the Aam Aadmi Party came to the well and started raising slogans. AAP MLAs are demanding that the Chief Secretary, Health Secretary and Finance Secretary of Delhi be suspended. AAP MLAs are raising slogans of "LG sir come to your senses."Due to uproar in the House, the proceedings had to be adjourned twice so far.

Aam Aadmi Party MLA Mohinder Goyal waved wads of notes in the Delhi Assembly on Wednesday. He claimed that this is the money received in bribe. He said, "Tender has been floated for the recruitment of nursing etc. in Baba Saheb Ambedkar Hospital. The government has a clause that 80 per cent of the old employees have to be retained, but this does not happen. There is huge collection of money in this."

Mohinder Goyal alleged, "I set up with him for disclosure and informed the DCP that 15 lakh bribe money is being given to me and I want to get him caught red-handed, but no action has been taken. I am in danger." I am doing this work by putting it, they are such powerful people that they can take my life. There should be a fair investigation.