Delhi Pradesh congressional committee chairman Ch Anil Kumar said when the unemployment rate in Delhi hit a record high of 41%, the Aam Aadmi party government was pursuing a liberalized excise policy by opening vending machines. of alcohol in every neighborhood. 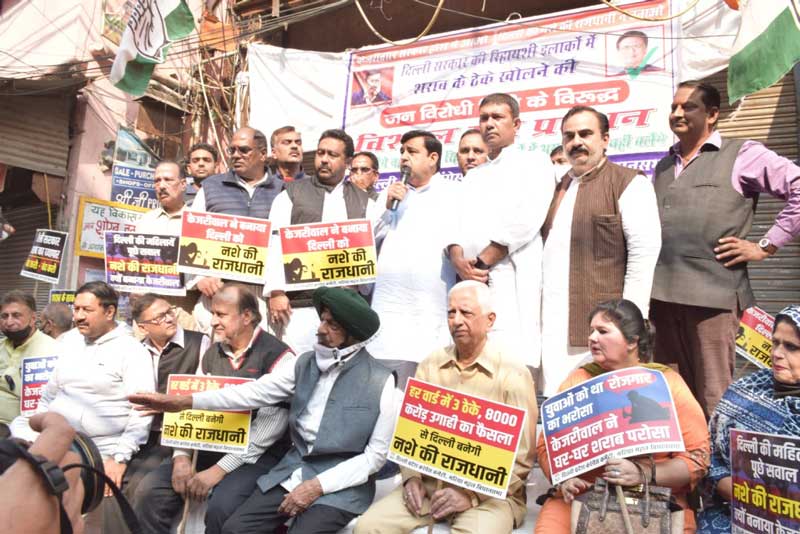 Delhi Pradesh congressional committee chairman Ch Anil Kumar said when the unemployment rate in Delhi hit a record high of 41%, the Aam Aadmi party government was pursuing a liberalized excise policy by opening vending machines. of alcohol in every neighborhood. free circulation of alcohol and misleading young people, which the Delhi Congress will oppose with all its might. He said congressional workers held dharna ahead of further alcohol sales today as the new excise policy took effect. He said congressional workers would step up their protests through the ongoing Pol Khol Yatra, to get the message across that while people struggled and suffered from unemployment and the devastation caused by the Covid19 pandemic, the Arvind government, offering no assistance to the population, fattened its treasury by earning more than Rs 9,000 crore by auctioning off new alcohol sales and in doing so , by collecting crores in bribes mafia.

Ch Anil Kumar said last night that Congress in Delhi launched the protest against the new excise policy at the Pol Khol Yatra in Krishna Nagar, where local people and Congress workers expressed their enthusiastic support for the opposition of the Congress party to the Arvind government's new liquor policy, as this will destroy young people and many families, with women and children absorbing the brunt of bad policy.

Ch Anil Kumar said Delhi Chief Minister Arvind was very enthusiastic and proactive in implementing the new excise policy, but he did not show such enthusiasm to create jobs, helping people to reorganize their lives after the struggles and suffering of the Covid pandemic. He said Prime Minister Arvind told the people of the Punjab that if his party came to power it would end the alcohol mafia rule in the state.

Ch Anil Kumar called on CM Arvind to be the first to implement the alcohol mafia rule in Delhi by abandoning the liberalized excise policy, which lowered the age of alcohol consumption to attract impressionable young people, including students, into alcohol addiction. , which will destroy generations of young people in the national capital.