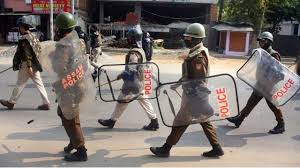 Assam-Meghalaya border violence death toll rises to 6, internet shut down in 7 districts for 48 hours Meghalaya government has suspended mobile internet services in 7 districts for 48 hours as a precautionary measure. Six people, including a forest worker, were killed in violence that broke out after Assam forest officials stopped a truck allegedly carrying illegal timber on the Assam-Meghalaya border in the early hours of Tuesday.

However, Assam Police officials said that when the truck was stopped by the state Forest Department team in the state's West Karbi Anglong district, a mob of people from the Meghalaya side attacked the team and the policemen, which led to an attack from the Assam side. Shots were fired to bring the situation under control. Sangma said, "Of the six people killed in Mukroh village of West Jaintia Hills district, five are residents of Meghalaya, while one forest worker died in Assam." The number mentioned is only four.