Israeli airstrikes on Gaza City engulfed three buildings and killed at least 26 civilians, as per medics, making it the deadliest single attack since Israel and the territory's militant Hamas rulers began fighting nearly a week ago. 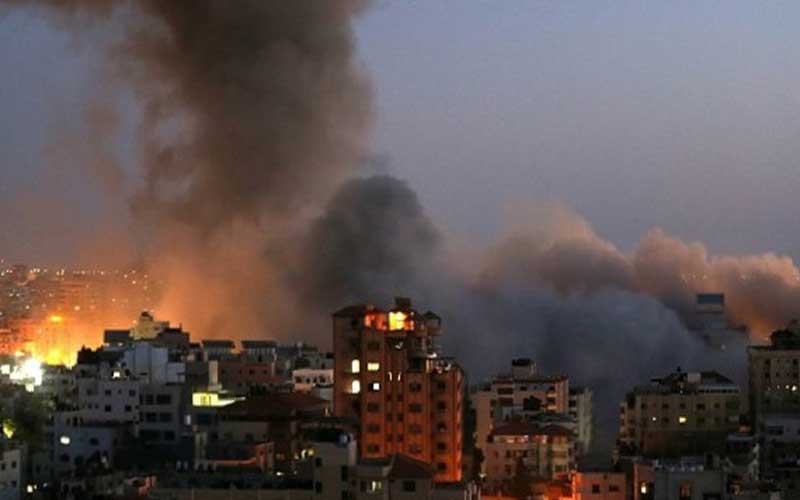 On Sunday, Israeli airstrikes on Gaza City engulfed three buildings and killed at least 26 civilians, as per medics, making it the deadliest single attack since Israel and the territory's militant Hamas rulers began fighting nearly a week ago. The Gaza Health Ministry reported that ten women and eight children were killed in the attack, with another 50 people injured. Into a hole in the debris, a rescuer could be heard screaming.

In a separate attack in the southern town of Khan Younis, the Israeli military claimed to have destroyed the home of Gaza's top Hamas leader, Yahiyeh Sinwar. It was the third such assault on the homes of senior Hamas leaders who have gone underground in the last two days.

As international mediators attempt to negotiate a cease-fire, Israel appears to have stepped up strikes in recent days to inflict as much harm as possible on Hamas. However, focusing on the group's leaders could stymie those efforts. A US diplomat is in the area, and the United Nations Security Council will meet on Sunday to try to de-escalate tensions.

Palestinians protested attempts by settlers to forcefully expel many Palestinian families from their homes and Israeli police steps at Al-Aqsa Mosque, a regular flashpoint situated on the number in the Old City revered by Muslims and Jews, earlier this month in east Jerusalem. Late Monday, Hamas launched rockets at Jerusalem, sparking an Israeli attack on Gaza.

The turmoil has also spilt over into the occupied West Bank, sparking demonstrations and inciting violence between Israel's Jewish and Arab residents, with clashes and vigilante attacks on people and property.

The military said it targeted Sinwar's home and that of his brother Muhammad, a senior Hamas figure, on Sunday. It demolished the home of Khalil al-Hayes, a senior Hamas political figure, on Saturday. Hamas' upper echelon has fled Gaza, and it's unlikely that all of them were at home when the strikes took place. Ismail Haniyeh, Hamas' top official, splits his time between Turkey and Qatar, both of which provide the party with political support.

Since the attack started on Monday, Hamas and the militant group Islamic Jihad have confirmed the deaths of 20 fighters. Israel claims the true figure is far higher, and it has published the names and pictures of two dozen suspected agents who were killed.

About 2,900 rockets have been launched into Israel by Hamas and other insurgent groups. According to the military, 450 rockets were missed or misfired, while 1,150 were intercepted by Israeli air defences.

Since the start of the war, when Israel claimed 90% of missiles were intercepted, the rate of interception appears to have fallen dramatically. A request for comment from the military was not immediately returned.

In the meantime, Israel has carried out hundreds of airstrikes across impoverished Gaza, which has been under an Israeli and Egyptian blockade since Hamas took control from rival Palestinian forces in 2007.

Israeli Prime Minister Benjamin Netanyahu said that the campaign would last as long as it is necessary. He said that inside the house, Hamas military intelligence was working. The military has also accused the militant group of using journalists as human shields, but no proof has been given to back up the allegations.

We have had no suggestion that Hamas was present or involved in the house, according to AP President and CEO Gary Pruitt. This is something we review on a regular basis to the best of our abilities. We will never intentionally endanger our journalists.

The military contacted the building's owner in the afternoon and warned that a strike would be launched within an hour. Employees of the Associated Press and other inhabitants were safely evacuated. Three missiles struck the building shortly after, destroying it and sending it back down in a massive cloud of dust.

Because of what happened today, the world will know less about what is going on in Gaza, according to Pruitt. We are shocked and horrified.

He said the Associated Press was seeking information from Israel's government and was working with the US State Department to find out more.

Later, US Secretary of State Antony Blinken called Pruitt to express his support for independent journalists and media organisations, and the White House said it had spoken with Israel directly to encourage journalist protection.

Although seeking to de-escalate the situation, the Biden administration has reaffirmed its support for Israel. Hady Amr, a US diplomat, is in the area as part of attempts to negotiate a cease-fire.