Krishna Janmashtami and Dahi-Handi were celebrated with religious fervor across Maharashtra on Friday after a two-year ban on coronavirus, though at least 24 Govindas were injured in Mumbai. 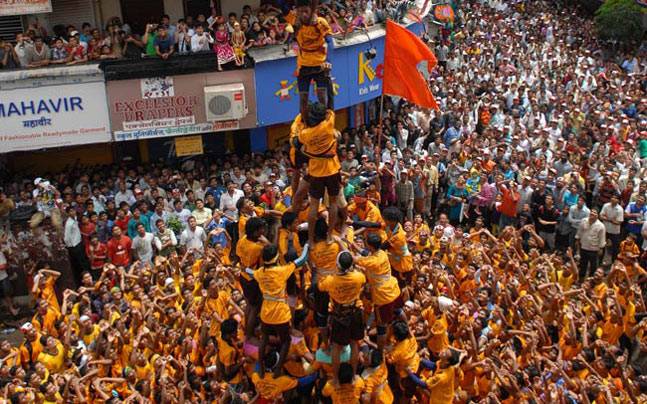 Krishna Janmashtami and Dahi-Handi were celebrated with religious fervor across Maharashtra on Friday after a two-year ban on coronavirus, though at least 24 Govindas were injured in Mumbai. The celebrations began at midnight, with thousands of devotees attending the aarti, a prayer for Balagopal's birth, at several Krishna temples in and around Mumbai. These include the ISKCON temples in Juhu and Chowpatty, the Sri Krishna Pranami temple in Kalbadevi, the Guruvayoor Sri Krishna temple in Navi Mumbai, and several other smaller places of worship dedicated to Lord Krishna.

In the morning, hundreds of 'Govinda' groups joined the 'Dahi-Handi' programmes. Thousands of people gathered on different grounds, squares, streets or societies, watching Govinda look at 'dahi-handis'. There were cash prizes ranging from Rs.100,000 to Rs.25,00,000 for the winning group and even a promise to travel abroad to set a world record.

During this festival, a pot filled with curd is hung high and Govinda breaks it by making a human pyramid. This game is organized all over Maharashtra on the occasion of Janmashtami. Incidents of participants falling and getting injured during sports are common. A BMC release said 24 members involved in the Dahi Handi game in Mumbai were injured till 3 pm. 19 of them were discharged after treatment. 5 Govinda has been admitted to the hospital.

Decision to give adventure sport status to Dahi Handi
Maharashtra Chief Minister Eknath Shinde announced in the Assembly on Thursday that his government has decided to give adventure sport status to the popular festival Dahi Handi. In a government order, all government, corporation and zilla parishad hospitals and medical colleges have been directed to provide free treatment to the participants injured during these events. The state government announced free treatment for those who fell and injured, as well as compensation, in addition to an insurance cover of Rs 10 lakh for each 'govinda'.