Around 500 people present on the bridge fell into the river. Of these, 134 have died so far. 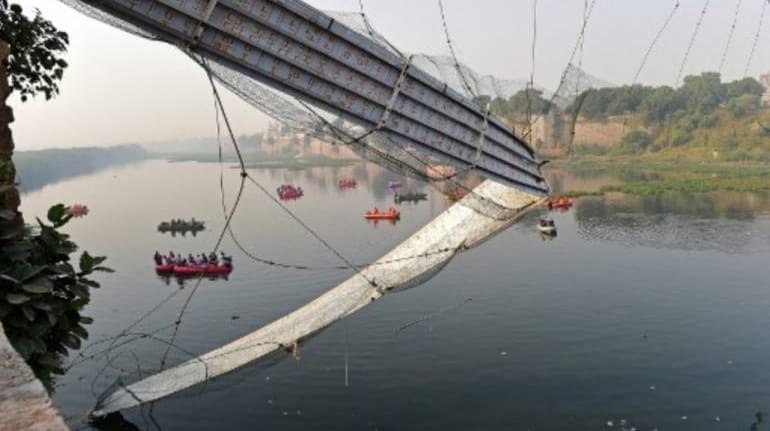 A suspension bridge meant for pedestrians in Gujarat's Morbi collapsed on Sunday night. It was repaired a few days ago. This bridge broke down just 5 days after it was opened to the general public. Around 500 people present on the bridge fell into the river. Of these, 134 have died so far. Women and more than 30 children were also among the dead. 200 people who were holding the cable net of the bridge were saved.

This bridge, called Morbi's identity, was 143 years old. Its width is 1.25 meters (4.6 ft). That is, close enough that two people can pass face to face. Its length was 233 meters (765 ft). So much so that if 500 people were standing on the bridge at once, everyone would almost be seen touching each other.

This pedestrian bridge is used to connect Lakhdhirji Engineering College in Morbi with the Durbargarh Palace. After the accident, many questions arose, which show that the negligence of the respondents took hundreds of lives simultaneously.

The Cable Suspension Bridge of Morbi was commissioned on 20 February 1879. Being 143 years old, it has been repaired many times. Recently the bridge was renovated for 6 months at a cost of Rs 2 crore. It was re-opened only on 26th October, the Gujarati New Year. The announcement of the Gujarat assembly elections is going to be done in a day or two. The Congress alleges that to take electoral advantage, it was started without testing chaos.

Whether a new bridge or a bridge has been renovated, before starting it, it is necessary to check its strength by an expert. They test how much load can be given on it. Sandeep Singh Jhala, chief officer of Morbi's municipality, said that Orewa allowed people to go on the bridge without informing the administration.

The company neither got its verification done by the municipal engineers before opening the bridge nor took the fitness specification certificate. Now the big question is that on October 26, Orewa Company MD Jaisukh Patel announced the commissioning of the bridge in a press conference, then why did the municipality not stop it?

This historic bridge of Morbi was under the authority of the municipality of the city. The municipality had entrusted the responsibility of its repair to the Ajanta Oreva Group of Companies. It is a manufacturer of electronic watches, calculators, home appliances, and LED bulbs. Oreva was the first to start selling LED bulbs with one year warranty in the country.

Municipality CMO Sandeep Singh Jhala admitted that there was no proper system to monitor the functioning of the company during repairs. That is, it was completely left to the company, how and from whom it gets the bridge built and when it start.

An agreement was signed with the Orewa Company for the repair, maintenance, and operation of the bridge for the next 15 years i.e. till 2037. The company's name board was present on the bridge, but no information or warning was written on either end regarding the capacity.

This bridge was famous as a picnic spot. In the weekend after Diwali, people went out for a walk. Due to the opening of the bridge after 6 months, there was an attraction among the people about it. Because of this, so many people came to visit there together. People were not being stopped, so by buying a ticket of Rs 17, about 400 people reached the bridge together.