According to IANS, Chennai Super Kings confirmed the fact that no such request by Moeen Ali was made to the management of CSK. 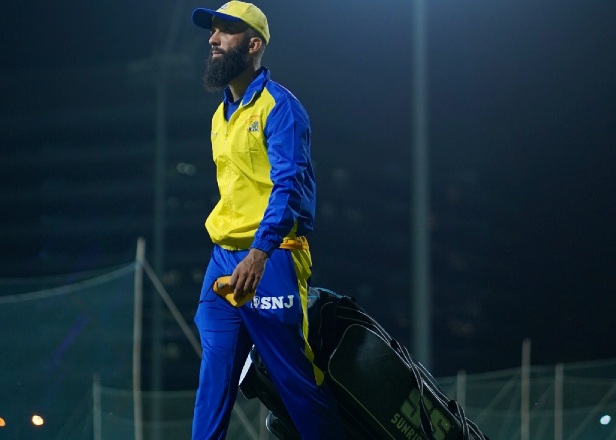 On Sunday, reports were rife in the media regarding England’s all-rounder Moeen Ali’s alleged request to his new IPL franchise Chennai Super Kings to remove from his jersey the logo of an alcohol’s brand logo.

The reports claimed that due to religious reasons Moeen Ali neither consumed alcohol nor did he promote, which is why he had asked for the removal of SNJ 10000’s logo from his cricket jersey. The reports also claimed that Moeen’s new IPL franchise had agreed to his request.

SNJ 10000 is a surrogate beer brand of SNJ Distilleries, which is a Chennai based company and one of the sponsors of the IPL team Chennai Super Kings. The logo of SNJ 10000 features on the left arm sleeves of the CSK jersey, which for this season will feature camouflage shoulder straps to pay homage to the Indian servicemen.

According to IANS, Chennai Super Kings confirmed the fact that no such request by Moeen Ali was made to the management of CSK.

The Chief Executive of Chennai Super Kings, Kasi Vishwanathan was quoted saying, “There has been no request made by Moeen to CSK to remove any logo.”

Moeen was bought by the Chennai IPL team for a whopping sum of Rs 7 crore after he was released by Royal Challengers Bangalore last year.

He appeared to be excited for playing for CSK and work alongside MS Dhoni, he said, "I've spoken to players who have played under MS and they tell me how he improves their game. I believe a great captain does that," he further added, "I think it's something on every player's wish list to play under MS. I think it's the confidence and the clarity he gives people. It's exciting."