Pidakala Samaram was in the village of Kairuppala, a tense affair, filled with crowds in the COVID-19, bringing the five-day Ugadi Utsavam to the end. 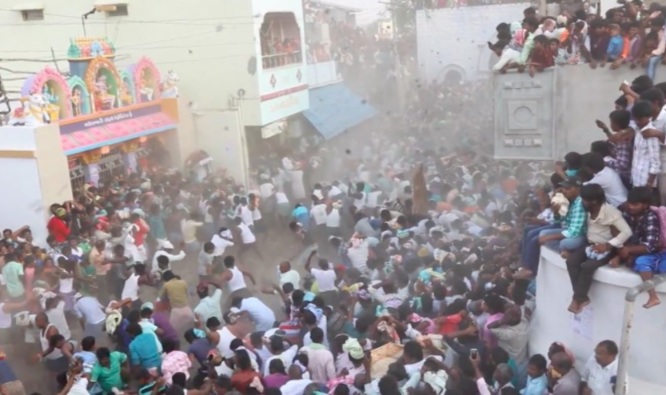 With states undergoing an alarming increase in Coronavirus infections, a frightening scenario was reported in Andhra Pradesh's Kurnool district as thousands flocked to celebrate New Year – Ugadi. The 'Pidakala Samaram' in Kairuppala village, which concluded the five-day-long Ugadi Utsavam, was filled with crowds who showed no concern for wearing masks or social distancing.

Thousands of villagers split into two groups of devotees representing the families of Veerabhadra Swamy and Kalikadevi during the festivities to beat each other, hurling cow dung cakes as part of the Ugadi celebrations in connection with the mythology behind the marriage.

Temple Executive Officer (EO) KS Rama Rao reported in a press release that the five-day Ugadi Utsavams ended on Wednesday. Every year, the villagers of Kairuppala celebrate the Pidakal Samara on the next day of the Ugadi festival to commemorate the marriage of Veerabhadra Swamy and Kalikadevi. According to them, the 'Pidakal Samara' has been celebrated as part of their rituals for centuries.

According to the Kurnool SP, a notice was sent to the organisers ahead of the festival requesting that they obey all COVID-19 guidelines during the festivities. The public was required to wear masks, maintain social distance, and keep processions to a minimum of 100 people, as stipulated by the state's COVID Unlock 5.0 guidelines. According to the SP, anyone who violated the rules could face disciplinary action.

Over the last two weeks, the number of new COVID-19 cases in Andhra Pradesh has steadily increased. It added 4,228 new cases on Wednesday, the most in exactly six months, as the active caseload surpassed 25,000 for the first time since October 30, reaching 25,850.