In its fight against COVID-19 since January 2020, India has crossed another peak. The cumulative tests have seen an unprecedented upsurge and surpassed 4 crores on August 29. 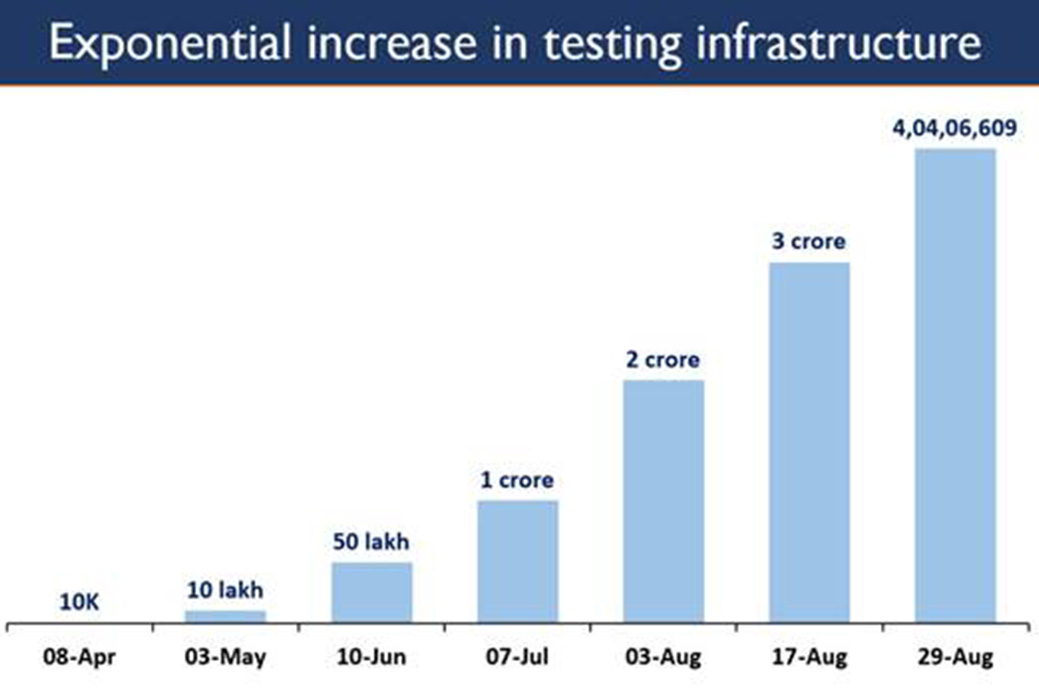 In its fight against COVID-19 since January 2020, India has crossed another peak. The cumulative tests have seen an unprecedented upsurge and surpassed 4 crores on August 29.

With focussed, consistent and coordinated efforts led by the Centre and implemented by the State/UT governments, India has set a new landmark of testing 4,04,06,609 people. India has come a long way from conducting just one test from the lab in Pune in January 2020 to crossing 4 crore tests milestone.

The single-day tests have also seen an upsurge. Already having achieved the testing capacity of 10 laks tests per day, 9,28,761 tests conducted in the last 24 hours.

This has boosted the Tests Per Million (TPM) with a sharp increase to 29,280. As is seen in many States/UTs that have increased the testing, the positivity rate will eventually fall with higher levels of testing. The national positivity rate has remained low i.e. 8.57% and is constantly falling.

India is following the strategic approach of TEST, TRACK, TREAT where testing forms the initial and crucial pillar of COVID response and management. It is only by aggressive testing that positive cases are identified at an early stage, their close contacts can be promptly tracked and isolated, and timely and effective treatment can be ensured for those in home isolation and the ones hospitalised.

Expanded diagnostic lab network and facilitation for easy testing across the country through several policy measures have given a substantial boost to this upsurge in national testing rates. There are as many as 1576 labs in the country; 1002 labs in the government sector and 574 private labs. These include: