The country’s testing capacities have multiplied manifold with more than 1900 labs across the country and with collaborative efforts of the Centre and State/UT governments. More than 15 lakh samples can be tested every day. 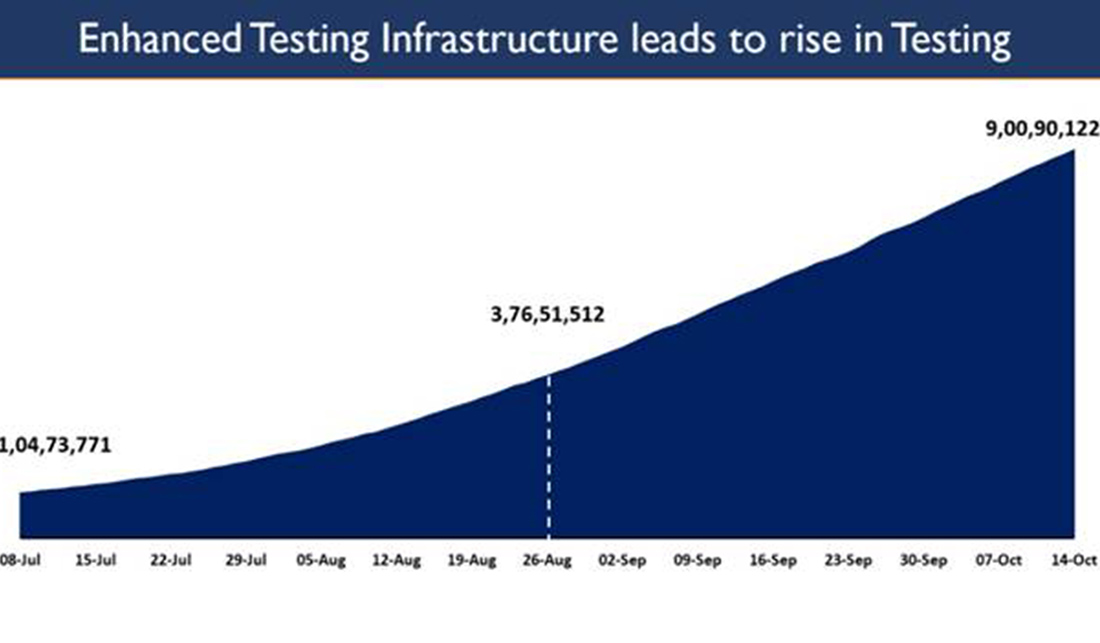 India has demonstrated an exponential increase in the number of COVID-19 cumulative tests since Jan 2020. It has crossed the landmark of 9 crore total tests on October 14.

The country’s testing capacities have multiplied manifold with more than 1900 labs across the country and with collaborative efforts of the Centre and State/UT governments. More than 15 lakh samples can be tested every day.

Progressive expansion in testing infrastructure has played a crucial role in the steep rise of testing numbers. With 1935 testing labs in the country including 1112 Government laboratories and 823 Private laboratories, the daily testing capacity has got a substantial boost.

Very high countrywide testing on a sustained basis has also resulted in bringing down the national positivity rate. This indicates that the rate of spread of infection is being effectively contained.

20 States/UTs have a positivity rate of less than the national average. The cumulative Positivity Rate is 8.04% and is on a continuous decline.

Higher testing across wide regions leads to early identification of positive cases, prompt tracking through efficient surveillance and tracing, and timely & effective treatment in homes/facilities and in hospitals for severe cases. These measures in tandem eventually lead to a lower mortality rate.

India is registering new recoveries more than the new cases consistently in recent days. As a result, the active cases are steadily declining and stand at 8,26,876 as of today and comprise only 11.42% of the total positive cases of the country.

74,632 COVID cases have recovered and discharged in the last 24 hours whereas the new confirmed cases stand at 63,509. A higher number of recoveries has aided the national Recovery Rate to further improve to 87.05%.

The total recovered cases stand at 63,01,927. The gap between Recovered cases and Active cases is 54,75,051. With an increasing number of recoveries, this gap is continuously widening.