Appearing for the ED, Additional Solicitor General (ASG) S. V. Raju told the court that during his earlier custody, the ED had conducted raids at several places and seized cash, documents and other documents. 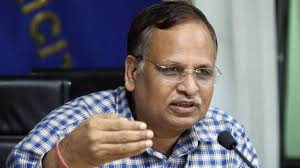 The court of Special Judge Gitanjali Goel of Delhi's Rouse Avenue Court on Thursday extended by four days the Enforcement Directorate's (ED) custody of Delhi Minister Satyendar Jain in a money laundering case. The court extended Jain's custody till June 13 on the application of the Enforcement Directorate (ED). The ED had sought extension of his custody by five days in the application.

Senior advocate Kapil Sibal, appearing for Jain, opposed the ED's application saying the accused were already in ED's custody and there was no ground to extend his custody further. Earlier, ED's Special Public Prosecutor N. Of. Matta had told the court that the agency had arrested Jain in the alleged money laundering case. The ED had taken Jain (57) into custody on May 30 under criminal sections of the Prevention of Money Laundering Act (PMLA).

After the hearing, when Satyendra Jain was brought out of the courtroom, his health suddenly deteriorated. He complained of restlessness and slight fainting. Seeing Jain's condition, he was immediately taken to the hospital. According to the information received, ED officials have gone to Ram Manohar Lohia Hospital with Satyendra Jain.