Breaking News : Country burning in protest against 'Agneepath', 22 trains affected in Bihar due to protest

Tear gas shells were fired at the Ara station. Thousands of passengers are stranded everywhere. Hundreds of vehicles are stuck on the roads. 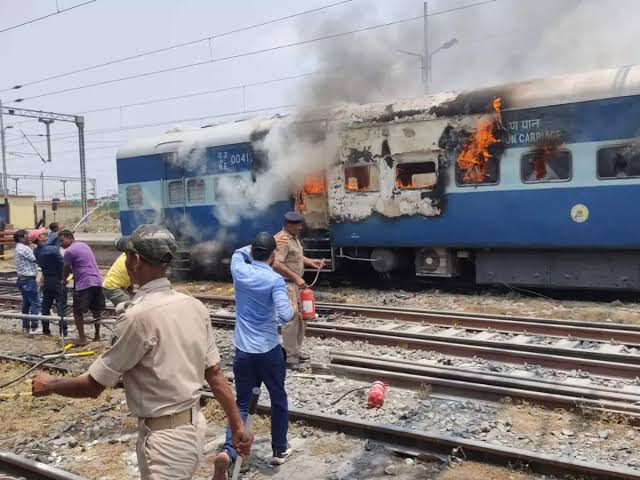 Violent demonstrations are taking place across the country against the Agneepath scheme. People are not liking this new scheme of the government at all. Due to the demonstration, even arson was seen in many places. It is also reported that about 22 trains have been partially affected in Bihar.

There is a fire in Bihar over the 'Agnipath Scheme' for reinstatement in the army. Army candidates are boiling for two days. Uproar and ruckus are going on in about a dozen districts. Trains were torched in Gopalganj, Chhapra and Kaimur on Thursday. Police and youth are face to face.

22 trains had to be cancelled. Dozens of train routes had to be changed. Many trains are still stuck here and there. Everything is chaotic, but the Chief Minister of the state Nitish Kumar is keeping silence on the whole matter. Whereas the Chief Ministers of other states are making many announcements so that the anger of the candidates can be reduced.

There is a strong opposition to the army's new recruitment scheme 'Agneepath' in Bihar. The protest which started from Buxar has reached many districts including Ara, Muzaffarpur, Jehanabad, Nawada, Chapra, Siwan, Gopalganj, Arwal and Begusarai. Demonstrations were held at various places on Wednesday, the very next day after the announcement of the Agneepath scheme for Agniveers. The commotion is going on for the second day on Thursday as well. Candidates say that for three to four years they are preparing for the exam and then there will be a job for four years, then it does not make any sense. A mob of students torched trains in Kaimur, Chapra and Gopalganj.