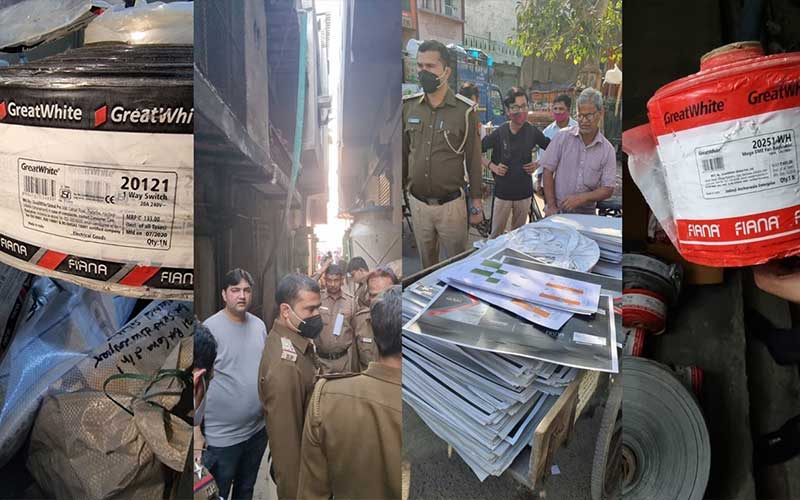 Great White is one of the leading Electrical Companies in the country and that could be inferred as a quick money scheme for the counterfeit manufacturers and suppliers. However, aware of its popularity amongst the customers, the company is vigilant and takes all necessary precautions to ensure that the quality isn’t compromised and the customers aren’t cheated with fake products.

The company has taken the services of SM Hussain IPR Protection Agency to keep a watch on its supply chain. SM Hussain IPR firm conducts continuous market surveillance across the country to keep a watch on the sale purchase activities of the product. During their recent surveillance, the IPR Officials came to know about some areas in Shahzada Bagh, North Delhi and Nagloi of Outer Delhi that were indulged in suspicious activities.

In the instance of a complaint received from SM Hussain IPR Protection Agency, on behalf of Great White Global Private Limited. An accused named Gopal Sharma (35) was found in possession of the counterfeit materials of Great White. Following the raid, at Shahzada Bagh, North Delhi, a large number of Great White Global's Packaging Paper Sheets were seized.

Another raid was conducted at Nihal Vihar, Nagloi, outer Delhi based on the investigation with Gopal, following which an accused named Gulab Singh (53) was apprehended, who proclaimed himself as Assembler from the Assembler Point. From this raid the following counterfeit Great White Products were seized; Counterfeit Sockets of Great White, Incomplete Sockets, Complete pieces of Black White Sockets, Pieces Roll, large number of Great White Global's Packaging Paper Sheets.

The police have lodged FIR based on the violation of the Trademarks Act and Copyrights Act. Syed Mashkur Hussain, who heads the IPR firm, says that this is a remarkable achievement and his firm will continue to ensure that not a single pair will be counterfeited and sold in the country.

“We carry out our surveillance activities across the country and have been very successful in curbing counterfeit activities. Great White Global is among such companies that believe in serving its customers in the best possible manner,” Hussain said.