Corona's peak will come in a week in China, 37 million people can be infected in 24 hours

According to the agency's estimates, more than half of the residents of Sichuan province in China's southwest and the capital Beijing have been infected. 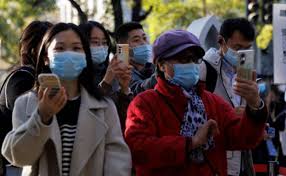 The situation is getting worse due to the Corona virus in China. Health officials said that the peak of corona will come this week. London-based global health intelligence company Airfinity said that about 37 million (37 million) people could be infected with Covid-19 in one day this week. This will make China's Covid outbreak the biggest outbreak in the world. According to the report, 10 lakh cases are coming daily in China and 5 thousand deaths are taking place. However, only 4 thousand cases were reported in the official figures on Thursday.

At least 248 million people, or about 18% of the population, are expected to be infected by the virus in the first 20 days of December, according to minutes of an internal meeting of China's National Health Commission on Wednesday, Bloomberg reported. If the projections turn out to be correct, the infection rate will also break the daily record of around 4 million in January 2022.

Due to Beijing's zero covid policy, people could not develop natural immunity and when the zero covid policy was unceremoniously abolished under pressure, the highly infectious Omicron variant spread to the low-level population. According to the agency's estimates, more than half of the residents of Sichuan province in China's southwest and the capital Beijing have been infected.

The Chinese health regulator has not clarified how the new wave of Corona came. However, reports suggest that the new wave of Corona came due to China's own negligence. Earlier this month, China banned RT-PCR testing booths. had shut down its ubiquitous network. During the epidemic, China also stopped tracking the daily data of Corona. Correct and sufficient figures could not be obtained from this. It is not known who is corona infected and how many people have been infected. This made the situation more frightening.