After the disclosure of Corona's new variant BF.7, two people have been found corona infected in Lucknow. The Health Department has also come on alert mode regarding the new infected. 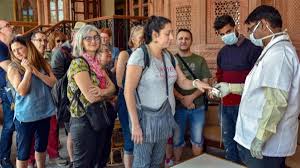 The possibility of the fourth wave of corona virus in the country is getting stronger. New cases of corona positive are coming up in a few cities, due to which it is feared that by the month of January, the fourth wave of corona may be seen in the country. After the disclosure of Corona's new variant BF.7, two people have been found corona infected in Lucknow. The Health Department has also come on alert mode regarding the new infected.

According to the information, an elderly woman has been found corona infected in Chinhat, Lucknow. The woman has returned from Odisha a few days ago. The woman had gone to visit several cities including Odisha. When the 56-year-old woman returned home 4 days ago, she complained of cold. The woman got her corona test done, after which her positive report has come today. At the same time, a 48-year-old man living in Chandan Nagar near Alambagh in Lucknow has also been found corona infected. Surprisingly, the said person had no travel history, yet he has become corona positive. That is, the virus has caught him while sitting at home.

Giving information, CMO Dr. Manoj Aggarwal said that the department is in contact with both the infected. Both have been kept in home isolation. Will be admitted to the hospital if needed. On the other hand, it is a matter of relief that none of the relatives have got the infection. Significantly, earlier a student of Kanpur IIT was found to be Corona positive. He had returned from Kolkata only two days back. As a precautionary measure, the corona test of the student was done. When the report comes positive, he has been kept in isolation. The number of active cases of corona in Uttar Pradesh has reached above 45.