Controversy over Hanuman Chalisa in Maharashtra: MP Navneet Rana and her husband arrested, to appear in court tomorrow; Complaint filed against Shiv Sainiks too 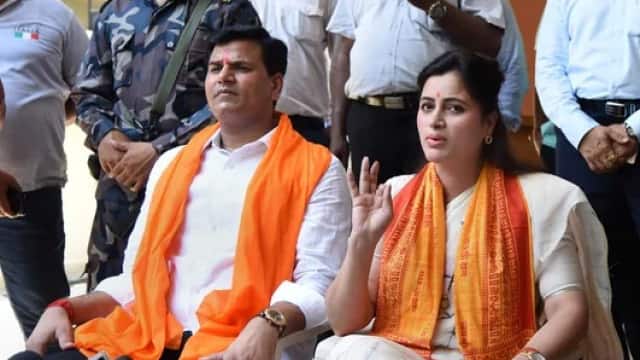 In Maharashtra, the political dispute over Hanuman Chalisa and loudspeakers is increasing. Independent MP from Amravati Navneet Rana and her MLA husband Ravi Rana were arrested by Khar police. There is an allegation against both of them of spreading hatred on the basis of religion, and caste through their statements.

A case has been registered against the Rana couple under section 153A of the IPC (promoting enmity between 2 groups on grounds of religion, caste, or language) at Khar police station in Mumbai. At present, interrogation of both is going on at Khar Police Station. Both will be produced in Bandra court on Sunday.

A complaint has also been lodged against the Shiv Sainiks on behalf of Rana. It was alleged that as a tactic, Shiv Sainiks were sent to my house and vandalized. Rhetoric was made against us, along with the talk of killing us was also made.

The Rana couple had announced to read Hanuman Chalisa outside Matoshree today. After this, a large number of Shiv Sainiks remained standing under Navneet Rana's building since morning. After a day-long uproar, the police arrested the Rana couple late in the evening. Happy with the police action, Shiv Sena Members burst firecrackers in front of their house and celebrated.

Navneet Rana said that she and her husband were forcibly brought to the police station. I am MP and my husband is MLA. He has appealed to Devendra Fadnavis and BJP for help. After this, former BJP MP Kirit Somaiya announced to go to Khar police station at 9 pm.