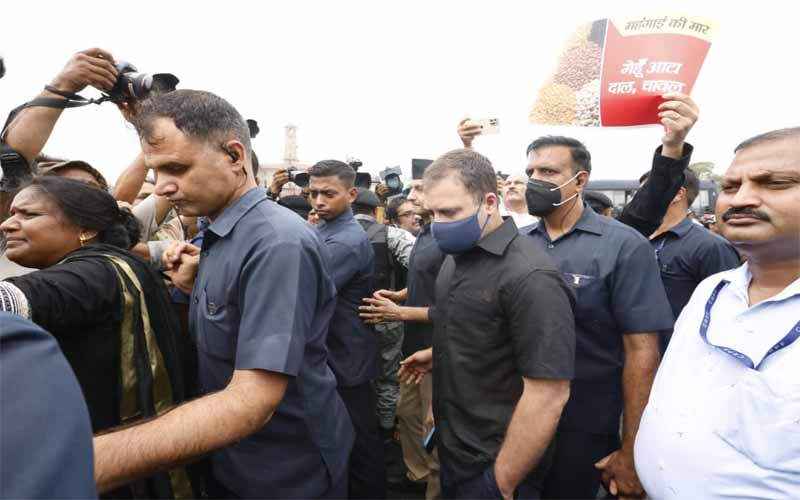 The Congress on Friday held a nationwide protest against inflation in the country. Section 144 was imposed in many areas of Delhi. Under the leadership of Congress President and MP Sonia Gandhi, all the parliamentarians of the party protested wearing black clothes in the Parliament. Congress MPs march from Parliament to Rashtrapati Bhavan to register their protest over inflation and unemployment. Delhi Police has detained MPs Rahul Gandhi and Shashi Tharoor during the protest.

Congress leader Priyanka Gandhi Vadra sat on a dharna outside AICC headquarters along with other party leaders and workers. Congress MP Rahul Gandhi said that we wanted to go to Rashtrapati Bhavan peacefully. All the people in the rally are MPs of Rajya Sabha and Lok Sabha but we are not being allowed to go. We are here on the issues of inflation and unemployment. Democracy is being murdered. Our job is to ensure that Indian democracy is safe. Our job is to raise public issues and we are doing our job.

During Congress's protest at Vijay Chowk, Leader of Opposition in Rajya Sabha Mallikarjun Kharge said that we are protesting peacefully against inflation, unemployment, GST rate hike and other issues.

Congress MP Shashi Tharoor said that we want to show the public on the way that whatever government is speaking about unemployment, inflation is not correct. We are free to show it. Once inflation was discussed in the House but the government rejected it. Once they go to the markets and see.