Sonia said that I have full faith that Kharge ji will inspire the entire party, get a message and the Congress will be strengthened under his leadership. 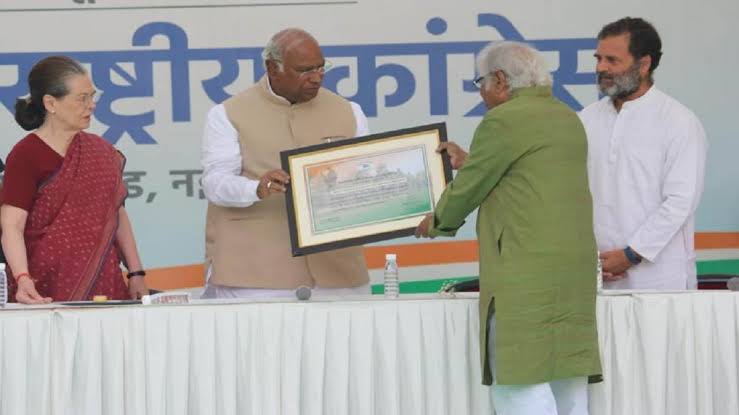 The certificate of election was given to Kharge on Wednesday at the Congress headquarters in Delhi. After this Kharge took over as the National President of the Congress Party. He was given the command of the party in the presence of Sonia Gandhi and Rahul Gandhi, General Secretary Priyanka Gandhi Vadra.

Mallikarjun Kharge, in his first address, said that today I express my gratitude for the honor given to a common worker, the son of a labourer. At the beginning of the program, Sonia thanked all the Congressmen and wished Kharge all the best. Thanking the Congressmen, Sonia said that the love, respect you have given for so many years, it is a matter of pride for me. I will feel this till the last breath of my life. Sonia said that I have full faith that Kharge ji will inspire the entire party, get a message and the Congress will be strengthened under his leadership.

Hailing from the Dalit community of Karnataka, 80-year-old Kharge had defeated his rival Tharoor, 66, in the historic election held on October 17. The election for the post of president was held for the sixth time in the party's 137-year history. After 24 years, someone outside the Gandhi family has become the President of Congress. Born on July 21, 1942 in Varavatti in Bidar district in a poor family, Kharge did his graduation in Kalaburgi apart from his schooling. A law graduate, Kharge was in the legal profession before joining politics. He is a follower of Buddhism and is the founder-chairman of the Siddhartha Vihara Trust built in the Buddha Vihara complex in Kalaburagi. He married Radhabai on May 13, 1968 and they have two daughters and three sons. One of his sons, Priyank Kharge, is an MLA and has been a minister in Karnataka.