Priyanka Gandhi and other Congress leaders have been attacking the Adityanath government over the law and order situation in the state, alleging that criminal activities were rampant, a claim denied by the state government. 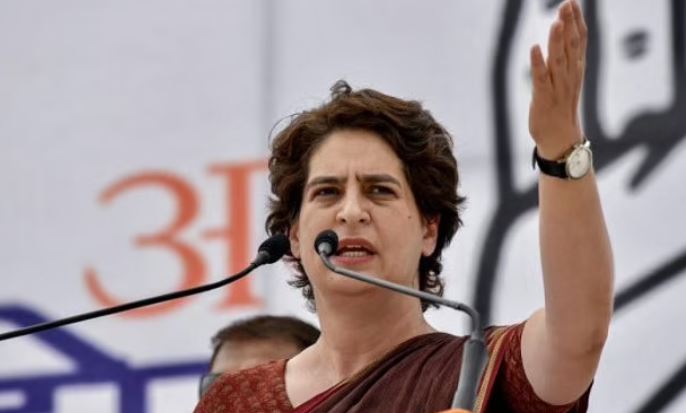 Congress leader Priyanka Gandhi has been campaigning for its party and is quite critical of UP Chief Minister Yogi Adityanath and his handling of law and order situation in the state.

She said on Wednesday that contrary to the Yogi Adityanath government’s propaganda, everyday one family or the other is “screaming for justice” in the state. On his alleged restlessness of winning Bengal, she had said, “Is Bengal elections more important that daughters in his own state, being raped and murdered?”

Her attack on the BJP had found a reference from the incident of a 50-year-old man being shot dead in Hathras district by an accused out on bail in a case of molestation lodged in 2018 against the victim's daughter and the body of a 12-year-old girl exhumed from a pit in a man's house in Bulandshahr.

"The father of a girl who did not take back a case of molestation was murdered in Hathras. The body of a girl, who had been missing for several days in Bulandshahr, was found buried in a house," Priyanka Gandhi said in a tweet in Hindi.

"Contrary to the UP government's false propaganda on crime, everyday one family or the other is screaming for justice," she said.

Priyanka Gandhi and other Congress leaders have been attacking the Adityanath government over the law and order situation in the state, alleging that criminal activities were rampant, a claim denied by the state government.

Also, said to be perturbed by the state of affairs in Assam, Priyanka also assured that Congress will bring law to nullify CAA in Assam if voted to power in assembly polls.. if voted to power in Assam, will bring a new law to “nullify” the Citizenship Amendment Act (CAA) in the state, she promised. Priyanka Gandhi, during a public meeting in Tezpur, launched the 'Five Guarantees' campaign, and said her party, if given a chance to form government in the northeastern state, will dole out Rs.2,000 every month to homemakers across the state, and provide free electricity up to 200 units to all households.

The All India Congress Committee (AICC) general secretary, who was in poll-bound Assam on a two-day visit, also claimed that her party will hike daily wages of tea garden workers to Rs.365 from the existing Rs 167, and provide at least 25,000 government jobs to youth.

"People of Assam were cheated by a party (BJP) five years ago that promised them 25 lakh jobs but gave them CAA instead. Our party is not making empty promises but undertaking five guarantees," the Congress leader, who sported a traditional 'gamocha' around her neck with the letters CAA crossed out on it, she said.

Though Priyanka draws a huge crowd in her gatherings and it is said that many of them just come to see her as they find reflection of her grandmother Indira Gandhi in her. Whether this turns into vote bank, is yet to be seen.