The yatra will start from September 7 and travel through 12 states from Kanyakumari and end in Jammu and Kashmir. This yatra of Congress will cover a distance of 3500 kms in 150 days. Rahul Gandhi will be a traveler of India. They will be involved in the entire journey. 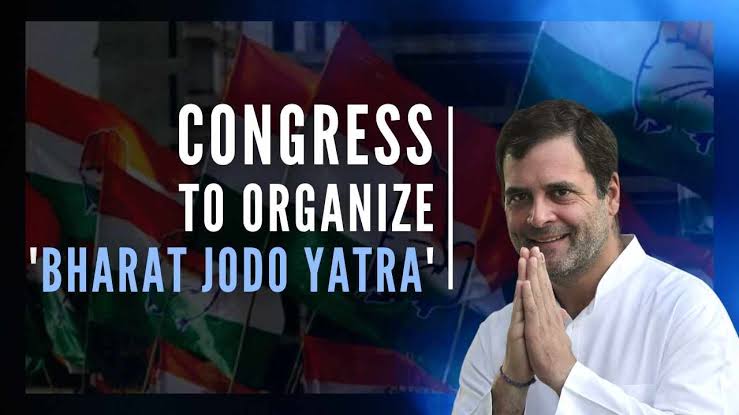 The Congress Party has today launched the logo and campaign of Bharat Jodo Yatra. This yatra is going to start from 7th September. Party leaders Jairam Ramesh and Digvijay Singh said that we have also launched a website to connect with this Yatra. He said that through this website, it will be our endeavor that whoever wants to be associated with it, they should register in this website. The live streaming of the Yatra will be available on the website. Congress party will also hold press conferences on September 5 in 32 cities regarding 'Bharat Jodo Yatra'.

On this occasion, senior Congress leader Digvijay Singh said, "Don't look at everything through a political lens, the Congress is traveling in pairs to India against the atmosphere of hatred in the country. The system is working contrary to the constitution, inflation and unemployment are increasing, the rupee is getting devalued, the loans of big industrialists are being waived, the Congress President had said during the Udaipur camp that she wants to have such a There should be a yatra in which people of all religions and classes should participate.

The yatra will start from September 7 and travel through 12 states from Kanyakumari and end in Jammu and Kashmir. This yatra of Congress will cover a distance of 3500 kms in 150 days. Rahul Gandhi will be a traveler of India. They will be involved in the entire journey.

Congress leader Rahul Gandhi will spend some time 'meditating' after paying tribute on September 7 at the 'Sriperumbudur memorial', the site of his father Rajiv Gandhi's assassination in 1991, and then embark on a 'Bharat Jodo Yatra' in Kanyakumari. Congress party sources indicated that work is being done to ensure that proper arrangements are made in Sriperumbudur and the objective of the party's nationwide visit is kept in mind. According to sources, prayer, a theme based on the tricolor to invoke nationalist sentiments to overthrow the BJP rule at the Centre, is being discussed. He said the yatra will run for four days in Tamil Nadu from September 7 to 10. Thereafter, from September 11, the yatra will continue in neighboring Kerala.