Sharing a video of Jyotimani on its official Twitter handle, Congress tweeted, "Tearing, dragging clothes of women MPs by the anti-women Modi government's police is a low level and shameful act. 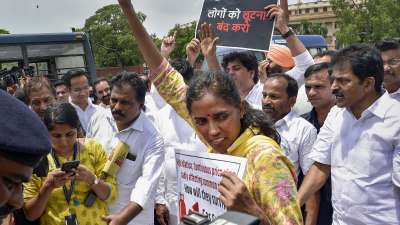 The Congress on Wednesday alleged that the Delhi Police misbehaved against Sonia Gandhi, her Lok Sabha member Jyotimani, during a protest against the Enforcement Directorate's (ED) interrogation. There has been no response from the Delhi Police on this allegation of the party.

Sharing the same video, former president Rahul Gandhi said in a Facebook post, "People's representatives who put the sufferings of the citizens of the country on the floor of the Parliament, they are being treated like criminals. Actually it is 'unparliamentary'." Congress General Secretary Priyanka Gandhi Vadra tweeted, "Prime Minister, these MPs have been elected by the people. Questions on the issues of inflation, unemployment are the questions of the public. Tearing the clothes of women MPs on asking questions, dragging them is cruelty to the extreme. In a democracy, you have to listen to questions on issues.

Jyotimani also tagged Lok Sabha Speaker Om Birla and tweeted, "Honorable Lok Sabha Speaker Sir, except raising the issue of inflation and GST, we have not done anything that tarnishes the dignity of the House, but we have been suspended. Are women MPs treated like this? Do we not deserve dignity?" He said, "We are not going to bow down to this. But it is a shame for all of us."