Concerned about the Delta Plus type of COVID-19, Punjab's chief minister extends the restrictions until July 10.

“In light of the Delta Plus variant cases, Punjab Chief Minister Captain Amarinder Singh on Tuesday ordered the extension of Covid restrictions until July 10, along with a slew of other concessions, including the opening of 50 percent capacity bars, pubs, and ‘ahatas' on July 1,” according to a statement. 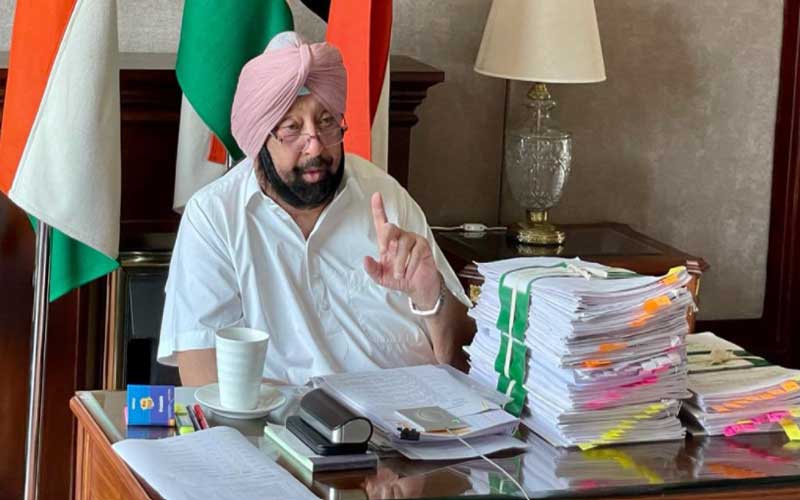 With the discovery of cases of the Delta Plus strain of COVID-19, Punjab Chief Minister Captain Amarinder Singh on Tuesday announced the continuation of the coronavirus limitations until July 10, with additional relaxations commencing July 1st, including the opening of bars and pubs with a 50% capacity. Staff and students must have received at least one dose of vaccination before being allowed to work in skill development centers and universities. According to the press release, IELTS coaching institutes were previously permitted to open as long as pupils and employees had received at least one dosage of the vaccination.

The Chief Minister made it very clear during a high-level Covid review meeting that bars, pubs, and other establishments would have to closely adhere to social distancing regulations, and that waiters, servers, and other staff should have had at least one dose of the Covid vaccination. He made it plain that the owners will be responsible for ensuring that the terms are met.

The Chief Minister expressed satisfaction with the decline in positivity to less than 1%, with an overall decrease in inactive cases, but highlighted that the positivity rate in some districts remained over 1%. Furthermore, the discovery of the Delta plus form was concerning, necessitating the continuation of the curbs, he stated. According to the Chief Minister, month-by-month whole-genome sequencing has revealed that more than 90% of the virus is a variety of concerns, with the original virus being largely replaced by variants. He noted that the Delta plus variant was seen in two cases (Ludhiana and Patiala), while the Delta variant was most common in May and June.

One of the 198 Ludhiana patient's contacts was found positive, and the sample was sent for genome sequencing, while the tracing/testing process is still ongoing in the Patiala case, for which the genome sequencing result was obtained in June 26. The genomic sampling of 489 samples, including 276 delivered in April, 100 in May, and 113 in June, is still pending with the central lab, according to Chief Secretary Vini Mahajan. She further stated that the Delta plus variation was discovered in samples supplied by the state government in May, the results of which were just released by Centre labs.

Captain Amarinder directed that the establishment of a Whole Genome Sequencing Lab at the GMCH Patiala, in collaboration with the international non-profit organization PATH, be expedited so that it may be operational by July. To verify the propagation of the probable third wave, he also ordered an intensification of genome sequences of patients reported from clusters in constrained geographical, institutional, or superspreader event zones. Balbir Sidhu, the Minister of Health, proposed keeping a tight eye on tourists from countries where Delta Plus variant cases have been reported.

The Chief Minister urged the Health and Medical Education departments to scale up testing as they reviewed the preparations for what experts think will be an imminent third way. In addition to the current 40000 per day, contact tracing, which is now at 22 per positive individual, should be reduced to no less than 15 per person. He also authorized the organization of outreach camps, particularly in rural, for testing, emphasizing the importance of continuing with Corona Mukt Pendu Abhiyan in full force.

On the steps taken to reduce the turnaround time for testing, he stressed the need to proceed expeditiously with the proposal from PATH to support automation of the government lab at GMCH Patiala on a pilot basis, and equip it with barcode scanning so that data is automatically fed into the system. The health department should continue to prioritize the Lok Sanjhedari model so that there is community ownership and a sustained campaign to observe Covid appropriate behavior, said the Chief Minister. Health Secretary Hassan Lal, in a brief presentation earlier, said the department had formulated a comprehensive surveillance strategy to keep a check on the potential third wave drivers.

Behavioral changes following the second wave, seasonal variations, re-infection due to diminishing immunity, and viral alterations are among these causes. The Chief Minister directed the department to focus on area-based restrictions (ward, hamlet, block, town, city), which would go beyond the micro confinement and containment tactics currently in use. Captain Amarinder requested that the department offer the 128 specialized doctors recently selected by the Dr. KK Talwar committee appointments and postings as soon as possible.

He went on to say that regular recruitment should continue at all levels. The Chief Minister stated that 77 PSA plants are being built to handle the demand for oxygen in the event of an unexpected rise. He also mentioned that the state has approximately 6,700 oxygen concentrators. OP Soni, the state's Minister of Medical Education and Research, said that 80 percent of the preparations for the third wave had already been finished in the state's government medical colleges.

With the Delta Plus variant already documented from 12 nations and 52 instances in Maharashtra, Dr. Talwar told the meeting that predicting the third wave due to mutation was extremely difficult. He urged utmost caution, saying that it was vital to observe the mutant's behavior. He stated that existing vaccinations were currently effective against the current variations. The Chief Minister emphasized that Punjab has had far fewer cases of Black Fungus (Mucormycosis) than most other states, including Haryana and Delhi, which not only had more cases but also more than three times the number of deaths. The Chief Minister, on the other hand, expressed regret that 51 people had perished as a result of the black fungus.