CM Yogi Adityanath along with Governor received Ram, Lakshman and Sita as a symbol 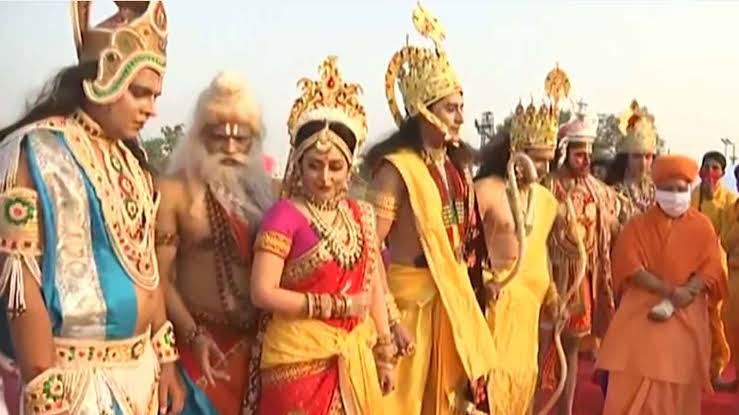 A day before Deepawali in Ramnagari Ayodhya, under the program of Deepotsav, Lord Shri Ram, Mata Sita and Lakshman are welcomed here on their arrival after exile. Chief Minister Yogi Adityanath along with Uttar Pradesh Governor Anandiben Patel welcomed him on his arrival in Ayodhya. Along with the Governor, the Chief Minister welcomed the actors playing the roles of Shri Ram, Sita and Lakshmana in Ramlila of Ayodhya.

It is organized every year under the huge Deepotsav program in Ayodhya. Chief Minister Yogi Adityanath along with State Governor Anandiben Patel welcomed the artists performing Ramlila in Ayodhya as part of the program of Deepotsav celebrations. Other leaders including Chief Minister Yogi Adityanath, Governor Anandiben Patel and Deputy CM Brijesh Pathak gave him a grand welcome. During this, flowers were also showered from Pushpak Viman. On the return of his worship, the whole of Ayodhya erupted with joy. Everyone present at the venue was overwhelmed.

Along with Lord Shri Ram, flowers were also showered from the helicopter on the return of Goddess Sita and Lakshmana to Ayodhya after 14 years of exile. Chief Minister Yogi Adityanath and Governor Anandiben Patel received them when the icons of Lord Shri Ram Ram and Sita Mata and Anuj Laxman reached Ayodhya today.

PM Modi Narendra Modi will also reach Ayodhya after about 14 months. Narendra Modi, who visited Ayodhya for the second time on Sunday as the Prime Minister, has done a great job on August 5 last year by visiting Shri Ram Lalla in Ayodhya. On August 5, 2021, PM Modi had performed Bhoomi Pujan for the construction of Shri Ram Janmabhoomi temple here. Since then the construction work of the temple has started and half the work is done.