Cabinet Minister Ganesh Joshi met the disaster affected people of Sarkhet. During this, the local people also placed their problems before the minister. On which he instructed the officers to resolve the complaints immediately. 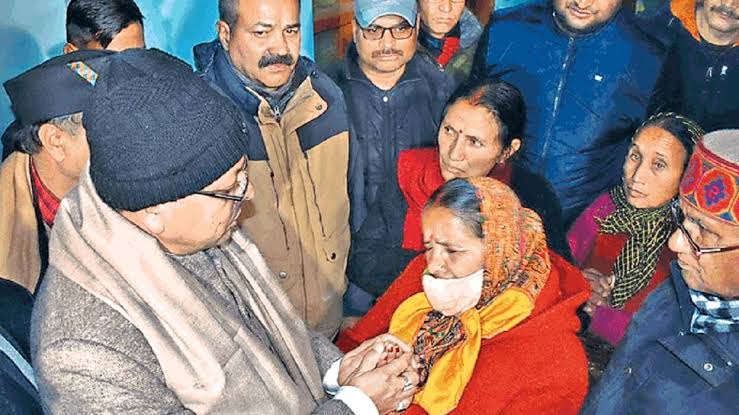 A committee has been formed to determine the compensation in the disaster-hit Joshimath town of Chamoli district. According to the order issued on Wednesday, a committee has been constituted under the chairmanship of District Magistrate Chamoli for transparent distribution of interim package to families affected by landslides in Joshimath and to determine the rate of rehabilitation package. This committee will make its suggestions available to the government.

Earlier, Cabinet Minister Ganesh Joshi met the disaster affected people of Sarkhet. During this, the local people also placed their problems before the minister. On which he instructed the officers to resolve the complaints immediately. Joshi said that the works under the announcement of the Chief Minister should be completed soon. He directed the officials that the land selected for the rehabilitation of the affected families should be inspected once and leveled. He said that the affected people are being shifted to other safer places. Testing is being done where there are problems.

He said that Rs.4.5 lakh would be given to each affected family for the construction of houses for the affected people and about Rs.4.5 lakh through any bank, in addition to this, about Rs.8.5 lakh would be given to each affected family. Said that in this hour of grief, the government stands with the affected and whatever help is available will be done.The Chief Minister of Uttarakhand, Pushkar Dhami, is in Joshimath since Wednesday, he met the people affected by the disaster to know their suffering, as well as he has assured that such arrangements will be made for the rehabilitation of the affected, which will be similar to those of the whole country. An example will be made for them. He has asked Minister in-charge of Chamoli district Dr. Dhan Singh Rawat to remain in Joshimath for monitoring the relief work.