Clashes between police and villagers in Hisar, one farmer killed, 12 injured including three policemen

Police can tamper with the dead body, so the post-mortem should be videographed. Till late evening, a meeting of the members of the Sangharsh Samiti was going on in the village cowshed. 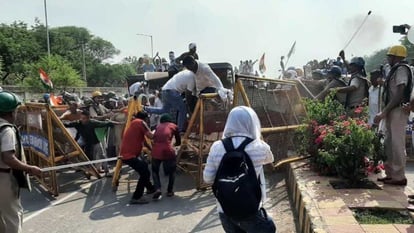 Farmers and villagers, who were going to block the railway track of Rajiv Gandhi Thermal Power Plant, clashed with the police on Friday over a dispute about stopping the lifting of ashes given to the cowshed of Khedar village in Hisar, Haryana. In this confrontation, 56-year-old farmer Dharampal, a resident of Khedar village, was killed and 12 people, including three policemen, were injured.

The cause of Dharampal's death is not clear. The body has been kept in the mortuary of Agroha Medical in the presence of DSP. Four youths have been taken into custody. Tension persists. Farmers have been staging a sit-in for 86 days to stop the lifting of ashes from the power plant. The railway track was to be blocked on Friday.

Even after persuading the police and administrative officers, the protesting farmers started walking towards the railway track at three o'clock in the afternoon. The police had put up barricades by making two-layer security arrangements. The farmers were told to hold talks with the District Deputy Commissioner in 10 minutes. When the Deputy Commissioner Dr. Priyanka Soni did not reach even after half an hour, the agitators started moving ahead by breaking the barricades with tractors.

The body will not be cremated until 25 lakh compensation is given to the relatives of the deceased Dharampal and a job is not given to one member of the family. The members of the Sangharsh Samiti allege that where the police took the dead body of Dharampal is not even known.