Chinese rocket segment splashes over in the Indian Ocean near Maldives

The freefalling part of the Long March-5B rocket, which had deployed the first module of China's new space station into Earth orbit on April 29th, as per Chinese officials was not a cause of concern. 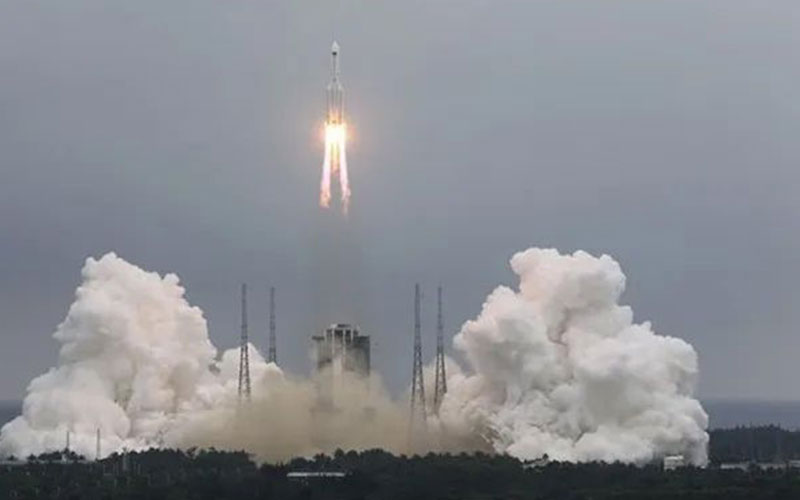 Following wild claims about where the 18-tonne Chinese rocket will crash, a huge part of it re-entered the atmosphere and collapsed over the Indian Ocean on Sunday, according to the Chinese space agency.

According to Chinese state media, the majority of the spacecraft's components were burned up during re-entry into the atmosphere.

The United States Space Command announced the rocket's re-entry over the Arabian Peninsula, but said it was unclear if the debris hit land or sea.

China had acted irresponsibly, according to NASA and other analysts, because an unregulated re-entry of such a massive object could cause destruction and casualties.

The freefalling part of the Long March-5B rocket, which had deployed the first module of China's new space station into Earth orbit on April 29th, as per Chinese officials was not a cause of concern.

The Long March was the 5B variant's second deployment since its maiden flight in May last year. Parts from the first Long March 5B had fallen on Ivory Coast last year, causing damage to many buildings, however there were no injuries recorded.

NASA administrator has expressed that spacefaring nations must reduce the dangers of re-entry of space objects to humans and human property on Earth while increasing accountability and transparency.

Given that water covers 70% of the earth, the segment's descent mirrored estimates made by some scientists that any debris must have splashed down into the ocean. Despite low statistical odds, the unregulated re-entry of such a massive object had raised worries over potential destruction and injuries.

More Long March 5B launches are anticipated in 2022, when more big parts of China's space station are set to be launched into orbit. Unless China changes its ways, the chances of someone being injured by a piece of a dropping booster would increase.