The Defence Minister Rajnath Singh said that it is apparent from Chinese activities that their words don’t match their actions." 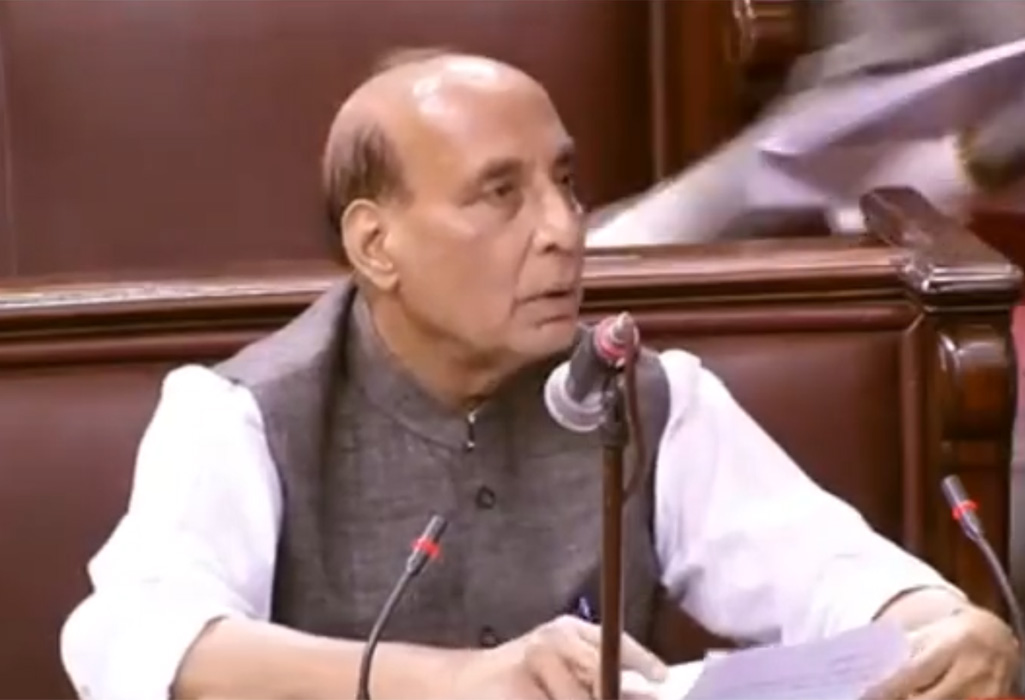 Briefing the members of the Rajya Sabha, the Defence Minister Rajnath Singh apprised them about the developments on the borders of Ladakh over the past few months.

"I would like to take some time first to briefly provide some details of our boundary issue with China. As the House is aware, India and China are yet to resolve their boundary question," Singh said while beginning his address.

"China does not accept the customary and traditional alignment of the boundary between India and China. We believe that this alignment is based on well-established geographical principles confirmed by treaties and agreements, as well as historical usage and practice, well-known for centuries to both sides," he said.

He informed that the two countries had engaged in discussions during the 1950s-60s but these efforts could not yield a mutually acceptable solution.

Singh told the members that China continues to be in an illegal occupation of approximately 38,000 sq. kms in the Union Territory of Ladakh and in addition, under the so-called Sino-Pakistan 'Boundary Agreement' of 1963, Pakistan illegally ceded 5,180 sq. kms. of Indian territory in Pakistan Occupied Kashmir to China. He also said that China also claims approximately 90,000 sq. kms. of Indian territory in the Eastern Sector of the India-China boundary in Arunachal Pradesh.

"Both India and China have formally agreed that the boundary question is a complex issue which requires patience and have committed to seeking a fair, reasonable and mutually acceptable solution through dialogue and peaceful negotiations. In the interim, the two sides also agree that maintenance of peace and tranquility in the border areas is an essential basis for the further development of bilateral relations," he said.

The Defence Minister clarified that as yet there is no commonly delineated Line of Actual Control (LAC) in the border areas between India and China and there is no common perception of the entire LAC. "Therefore, in order to ensure peace and tranquility in the border areas, especially along the Line of Actual Control (LAC), the two countries have concluded a number of agreements and protocols."

"Under these agreements, the two sides have agreed to maintain peace and tranquility along the LAC without any effect to their respective positions on the alignment of the LAC as well as on the boundary question. It is on this basis, that our overall relations also saw considerable progress since 1988. India’s position is that while bilateral relations can continue to develop in parallel with discussions on resolving the boundary question, any serious disturbance in peace and tranquility along the LAC in the border areas is bound to have implications on the positive direction of our ties," he added.

He added, "But, thereafter the Chinese side did not show a willingness to pursue the LAC clarification exercise. As a result, there are some areas where the Chinese and Indian perceptions of LAC overlap. In these areas, as also with other sections of the border areas, the various agreements govern the manner in which troops of both sides should operate and deal with situations of face-offs to maintain peace and tranquility."

Talking about an elaborate and time tested coordination mechanism amongst different intelligence agencies including intelligence units of the Central Armed Police Forces and the three armed forces, he said that the technical and human intelligence is continuously gathered in a well-coordinated manner and It is shared with the armed forces which help them in taking decisions.

Speaking on the developments in 2020 this year, he said that since April, "we had noticed a buildup of troops and armaments by the Chinese side in the border areas adjacent to Eastern Ladakh. In early May, the Chinese side had taken action to hinder the normal, traditional patrolling pattern of our troops in the Galwan Valley area, which resulted in a face-off. Even as this situation was being addressed by the Ground Commanders as per the provisions of our bilateral agreements and protocol, in mid-May the Chinese side made several attempts to transgress the LAC in other parts of the Western Sector."

"This included Kongka La, Gogra and North Bank of Pangong Lake. These attempts were detected early and consequently responded to appropriately by our armed forces," Singh added.

The Defence Minister said that India made it clear to the Chinese side both through diplomatic and military channels that China was, by such actions, attempting to unilaterally alter the status quo. It was categorically conveyed that this was unacceptable.

"Given the growing friction along the LAC, the Senior Commanders of the two sides in a meeting on June 6 2020 agreed on a process of disengagement that involved reciprocal actions. Both sides also agreed to respect and abide by the LAC and not undertake any activity to alter the status quo. However, in violation of this, the Chinese side created a violent face-off on June 15th at Galwan. Our brave soldiers laid down their lives and also inflicted costs including casualties on the Chinese side," Singh said.

He also said that the conduct of our armed forces throughout these incidents shows that while they maintained “Sayyam” in the face of provocative actions, they also equally displayed “Shaurya” when required to protect the territorial integrity of India. "I would like the House to appreciate the courage and valour of our soldiers, who undergo immense hardship in the most difficult conditions to keep us all safe and secure."

The Defence Minister cautioned that while no one should doubt India's determination to safeguard its borders, India believes that mutual respect and mutual sensitivity are the basis for peaceful relations with neighbours.

"As we want to resolve the current situation through dialogue, we have maintained diplomatic and military engagement with the Chinese side. In these discussions, we have maintained the three key principles that, determine our approach: (i) both sides should strictly respect and observe the LAC; (ii) neither side should attempt to alter the status quo unilaterally; and (iii) all agreements and understandings between the two sides must be fully abided by in their entirety," he said.

He said that the Chinese side, on its part, took the position that the situation should be handled in a responsible manner and ensure peace and tranquility as per bilateral agreements and protocol. "However, it is apparent from Chinese activities that their words don’t match their actions."

"A case in point is that even when the discussions were going on, the Chinese side again engaged in provocative military manoeuvres on the night of 29th and 30th August in an attempt to change the status quo in the South Bank area of Pangong Lake. But yet again, timely and firm actions by our armed forces along the LAC prevented such attempts from succeeding," He said.

He stated that it is clear from these events, the Chinese actions reflect a disregard of our various bilateral agreements.

According to Singh, "The amassing of the troops by China goes against the 1993 and 1996 Agreements. Respecting and strictly observing the Line of Actual Control is the basis for peace and tranquility in the border areas and explicitly recognized in both 1993 and 1996 agreements. While our Armed Forces abide scrupulously by it, this has not been reciprocated by the Chinese side."

He further said, "Their actions have led to face-offs and frictions from time to time along the LAC. As I mentioned earlier, the agreements have detailed procedures and norms to deal with the situation of face-offs. However, in the recent incidents, this year, the violent conduct of Chinese forces has been in complete violation of all mutually agreed norms."

Highlighting the present scenario, Singh said that as of now, the Chinese side has mobilized a large number of troops and armaments along the LAC as well as in the depth areas.

"There are several friction areas in Eastern Ladakh including Gogra, Kongka La and North and South Banks of the Pangong Lake. In response to China’s actions, our armed forces have also made appropriate counter deployments in these areas to ensure that India’s borders are fully protected," He said.

Singh said that over the last many decades, China had undertaken significant infrastructure construction activity that enhanced their deployment capabilities in the border areas. However, in response, our Government too has stepped up the budget for border infrastructure development to about double the previous levels.

"As a result, more roads and bridges have been completed in the border areas. This has not only provided much-needed connectivity to the local population but has also provided better logistical support for our armed forces, enabling them to be more alert in the border areas and respond more effectively where required. In the coming years too, the Government remains committed to this objective. We will not back down from taking any big and tough step in the interest of our country," he said.

The Defence Minister emphasized that India remains committed to resolving the current issues in its border areas through peaceful dialogue and consultations.

"It was in pursuit of this objective that I met my Chinese counterpart on 4th September in Moscow and had a detailed discussion regarding the current situation with him. I conveyed in clear terms our concerns related to the actions of the Chinese side, including amassing of a large number of troops, their aggressive behavior and attempts to unilaterally alter the status quo that were in violation of the bilateral agreements," He said.

Singh said that in past also India has had situations of prolonged stand-offs in its border areas with China which have been resolved peacefully. "Even though the situation this year is very different both in terms of the scale of troops involved and the number of friction points, we do remain committed to the peaceful resolution of the current situation."

He assured every Indian that the morale and motivation of the Armed Forces are very high, and Indian soldiers are committed to overcoming any challenge that may come in their way.

"This time also, our soldiers have chosen patience and courage over aggression. We have a saying – “‘साहसे खलु श्री वसति’” meaning “Victory resides in courage”. Our soldiers are a living symbol of restraint, bravery, and valor," he said.

Singh admitted that India is facing a challenge in Ladakh, but "I am confident that our country and our brave soldiers will be able to surmount every challenge," he said.

"I urge this House to unanimously honour the courage and valour of our Armed Forces. A message of unity and complete confidence of our brave soldiers will resonate not only across the country but also across the world and shall infuse a new confidence, new energy and unlimited enthusiasm in our forces," Singh concluded.