According to the statement, the government considered the interests of all concerned and the principle of sovereign equality of countries. 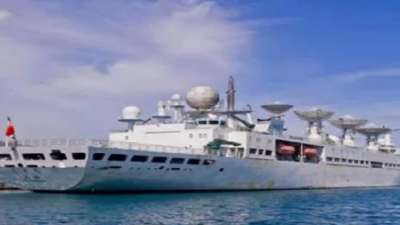 Amid India's concerns, the Chinese ship 'Yuan Wang 5' with satellite and missile tracking capability reached Sri Lanka's southern port 'Hambantota' on Tuesday. A few days ago, Colombo had requested Beijing to postpone the arrival of this ship in view of India's concerns. China's ballistic missile and satellite surveillance ship 'Yuan Wang 5' reached the southern port of Hambantota at 8:20 am local time. The ship will stay here till August 22. The ship was earlier supposed to reach the port on August 11 but was delayed due to lack of clearance from the Sri Lankan authorities.

Sri Lanka's foreign ministry last week requested the Chinese embassy to postpone the arrival of the ship after India expressed security concerns. After this, Colombo on Saturday allowed the ship to stay at the port from 16 to 22 August. Significantly, during its stay in the port of Sri Lanka, India had expressed the possibility of trying to spy on Indian installations through the surveillance system of this ship.

The Sri Lankan Foreign Ministry, while giving the final nod for the ship's stay at the port, said last week that the Sri Lankan government had discussed the matter at a high level through diplomatic channels with all concerned with the aim of resolving the matter through friendly, mutual trust and fruitful dialogue. Had extensive discussions. According to the statement, the government considered the interests of all concerned and the principle of sovereign equality of countries.