He stated, "No one should underestimate the resolve, the will and ability of the Chinese people to defend their national sovereignty and territorial integrity." 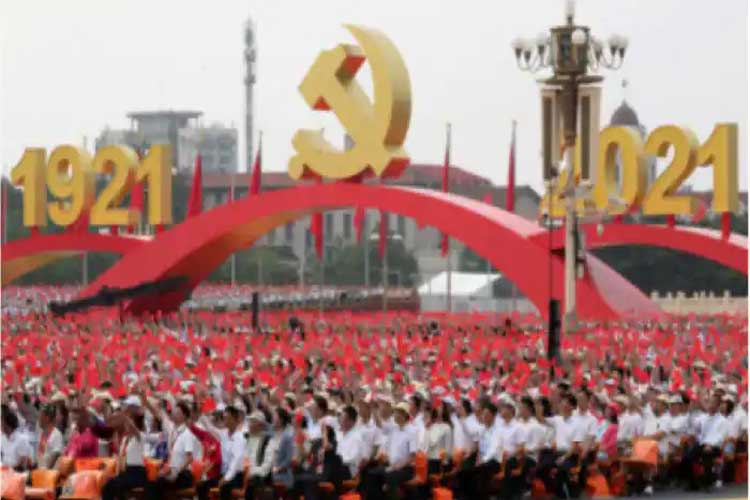 On Thursday, China marked the 100th anniversary of the establishment of its ruling Communist Party with a flyover of fighter aircraft and helicopters over Tiananmen Square in the capital of Beijing.

Crowds rejoiced as 30 aircraft created a "100" in front of the nation's leaders, including President Xi Jinping, who was sat on the Forbidden City's southern ramparts.

The Chinese Communist Party, which rose to power under Mao Zedong in 1949, began by recruiting peasants and workers, but has since developed to welcome markets and entrepreneurship under the banner of "socialism with Chinese characteristics," while maintaining a Leninist authoritarian ideology.

Xi and the party are riding high as China recovers quickly from the Covid-19 pandemic and asserts itself more confidently on the international scene, despite criticism of Beijing's actions in Hong Kong and Xinjiang, as well as a deteriorating demographic outlook that threatens long-term economic development.

China's President Xi made a forceful address at a ceremony commemorating the ruling Communist Party's centennial. He warned that foreign countries that try to coerce or influence the country will "get their heads bashed."

Xi also stated that Beijing would not tolerate "sanctimonious preaching," words largely seen as intended at the United States. He stated that China has an "unshakable commitment" to unification with Taiwan.

He stated, "No one should underestimate the resolve, the will and ability of the Chinese people to defend their national sovereignty and territorial integrity."

Even as former President of the People's Republic of China Mao Zedong and other past leaders are also honoured, the centennial celebrations appear to be aimed at enhancing Xi's credentials as a leader who has made significant progress in poverty reduction and economic development while elevating China's global profile and standing up to the West.