Chief Minister Yogi Adityanath reached Ayodhya on Friday for the second time in his second term. He first appeared in the court of Hanumant Lala. 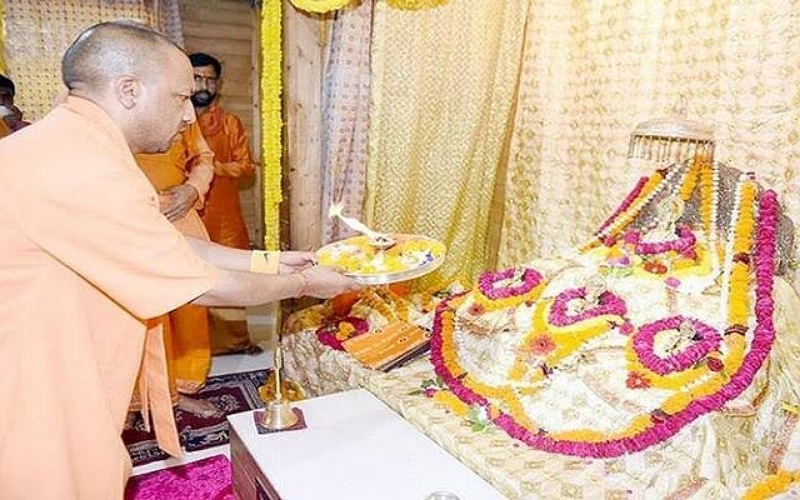 Chief Minister Yogi Adityanath turned to Ramnagari Ayodhya on Friday after a three-day tour of Uttarakhand. CM Yogi Adityanath performed darshan-worship at Hanumangarhi and Shri Ram Janmabhoomi in Ayodhya. After this, along with reviewing the progress of projects worth 1900 crores related to Ayodhya, site inspection will also be done. He has a program of co-bhoj in the slum along with conducting a Mandal review of Ayodhya here.

On arrival in Ayodhya, Chief Minister Yogi Adityanath also did darshan and worship at Shri Ram Janmabhoomi temple along with Hanuman Garhi. He was accompanied by Chief Secretary Durga Shankar Mishra. He will review the progress of development projects worth 1900 crores in Ayodhya as well as conduct on-site inspection of them. Along with this, he will also examine the development work and law and order of Ayodhya Mandal. In this divisional review, except Ayodhya, officers of other districts of the division will participate virtually.

He will unveil the statue of Maharana Pratap at Guptar Ghat and will leave for Circuit House from Guptarghat at 5 pm. From 5.15 pm to 6.15 pm, he has a program to meet the saints. Before the Chief Minister, the minister in-charge of the district AK Sharma reached Ayodhya in the morning itself. He also visited Ramnagari and saw the progress of development works. Tight security arrangements have been made in Ramnagari for the arrival of the Chief Minister. His venue has been kept under special surveillance.