Check the fact: Nashik man did not acquire magnetic abilities after getting Covid jab

A video of a man with a lot of spoons and coins stuck to his body has become popular on social media. He said that his family did not make the film to disseminate false information about the vaccination or to blame it on the vaccine. "We just wanted to know why this happened." 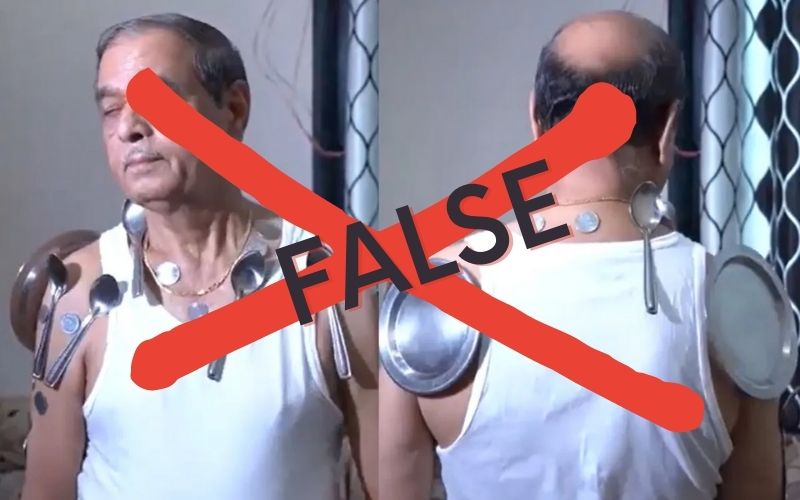 A video of a man with a lot of spoons and coins stuck to his body has gone viral on social media in the past week. It is said that once he was inoculated, his body gained magnetic abilities. Many news outlets and web portals reported on this incident, implying that magnetic power had entered this person's body as a result of receiving the COVID-19 jab.

In that video, the 71-years-old Arvind Sonar of Nashik, Maharashtra, was seen as his son places a large number of coins, spoons, and plates on the upper portion of his body, which quickly clings to Arvind's skin like iron attaches to a magnet. Notably, numerous major media outlets interviewed Arvind Sonar about this incident. Several of them named him "Magnetic Man" without uncovering the true cause of this phenomenon. Arvind says in the report that he received a WhatsApp forward, following which he performed this experiment and discovered that this is indeed happening.

In fact, this viral video has received a lot of attention on social media.

However, the viral video claim is false.

Arvind Sonar claimed in a statement that his family did not make the video to disseminate false information about the vaccination or to blame it on the vaccination. "We just wanted to know why this happened."

Jayant Sonar, Arvind's son, stated emphatically that he did not want the vaccination to cause any misunderstanding among the public. "I saw a posting on social media claiming that after receiving the second dose of Covishield, people's bodies began to attract magnets. I invited both my father and mum to participate in the experiment."

Jayant went on to say that nothing similar happened in his mother's body while items stuck to his father's. He was aware that this was not the result of the vaccination.

"We knew it wasn't the vaccination since these items didn't cling to my mother's skin. We wanted to know what was going on since my father is diabetic, so we spoke to a few people, and the media picked up on it. We simply mentioned that we tried it out to see what the message said, but we have not claimed that it was due to the vaccine, "Jayant said.

According to the family, they don't know if Arvind had that talent previously or not.v

Arvind Sonar is heard stating in a video broadcast that he tried to mimic a WhatsApp message and wants to know why things adhered to his body.

The Medical Officer of the Nashik Municipal Corporation, Dr Bapusaheb Nagargoje, verified that metals were getting attached to Arvind's body and stated that the magnetic power issue is unrelated to the corona vaccination.

He stated that no similar complaint had been filed in the entire district. So yet, no one has complained that their body is endowed with magnetic power. Dr Nagargoje stated, "We're looking into it to figure out what's causing it, and the findings won't be available right now. One thing we can be certain of is that it is not caused by a vaccination."

Another similar video went popular in India in 2016, claiming that magnetic power had entered a man's body.

Although doctors have confirmed that the occurrence has nothing to do with the Covishield vaccination, yet the cause of the anomaly is unknown. As a result, the claim is false.