According to a circular distributed to states last month by the Union Health Ministry, the scheme ended on March 24 with only 287 claims processed up to that point. 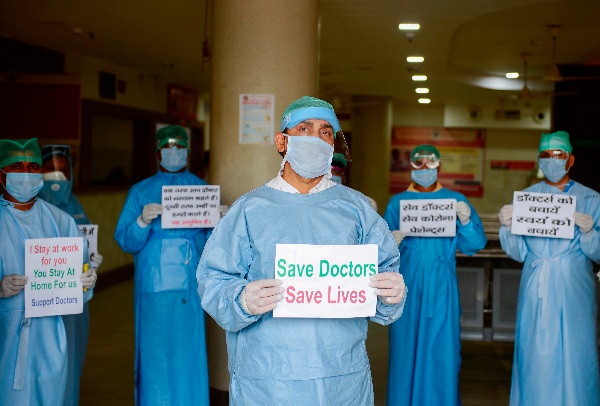 According to reports, the Centre has agreed to cancel the current Rs 50 lakh insurance policy for healthcare staff who die while on Covid-19 service. According to Union Health Ministry officials, the government is in negotiations with a new insurance provider.

"The insurance provider will settle claims under the Pradhan Mantri Garib Kalyan Yojana until April 24, 2021," said the Union Health Ministry in a tweet.

"Following that, a new dispensation would protect the Corona warriors, for which the ministry is in discussions with a new insurance firm (New India Assurance)," it added. As per a circular distributed to states last month by the Union Health Ministry, the scheme ended on March 24 with only 287 claims processed up to that point. The Union government launched the scheme last year as part of its Rs 1.7 lakh crore Covid-19 relief package, anticipating the deaths of healthcare staff.

Insurance cover of Rs. 50 Lakhs is provided under
PMKGP scheme. This has provided a safety net to the dependents of Corona warriors who lost their lives to #COVID.
287 claims have been paid by the Insurance Company so far.

Workers in the private sector were also protected by the scheme.

There is no official estimate of the number of frontline staff who have died from Covid-19 in India, however, according to the Indian Medical Association, the major body of doctors in India, at least 739 MBBS doctors have died from the infectious disease, which includes three doctors in the second and ongoing wave of the pandemic.

Union health secretary Rajesh Bhushan, in a letter to states, wrote on March 24 this year that while “the scheme has served as a very successful safety net and has been able to provide relief to the healthcare workers who have lost their lives due to Covid19,” it had to be concluded on the same day.

As per his letter, all claims received by midnight on March 24 will be eligible for coverage under the programme, and a one-month window will be given for the final submission of all eligible claims to the insurance provider, along with the required supporting documentation.

The scheme, declared on March 26, 2020, by Union Finance Minister Nirmala Sitharaman, was initially introduced for 90 days before being extended for a year. Bhushan did not answer this newspaper's inquiry about the contents of the letter sent to the states.