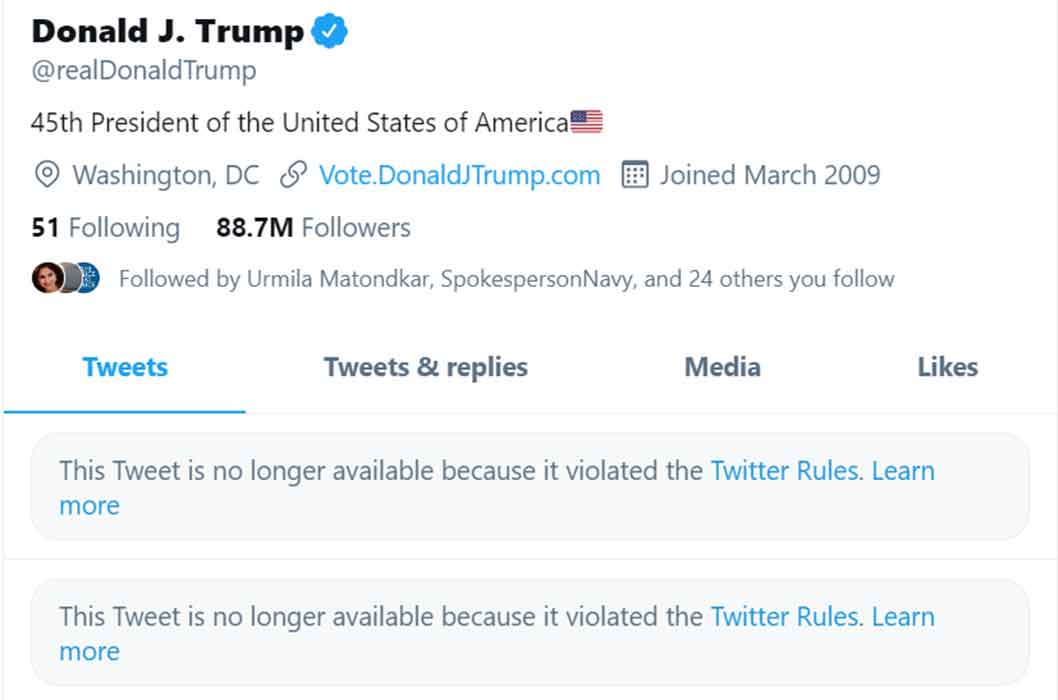 Twitter has deleted his posts and imposed a 12-hour ban on him.

Similarly, Facebook and Instagram too found his posts in violation of norms and first restricted him from accessing the account for 24-hour. However, it extended the ban indefinitely. now.

According to reports, he posted a video in which he expressed his support for those who stormed Capitol Hill in his favour.

The unprecedented and deadly coup by his supporters has resulted in four deaths and chaos.

“As a result of the unprecedented and ongoing violent situation in Washington, D.C., we have required the removal of three @realDonaldTrump Tweets that were posted earlier today for repeated and severe violations of our Civic Integrity policy,” Twitter Safety wrote.

It added, “This means that the account of @realDonaldTrump will be locked for 12 hours following the removal of these Tweets. If the Tweets are not removed, the account will remain locked.”

The last tweet showing on Trump's Tweeter handle, reads, "I am asking for everyone at the U.S. Capitol to remain peaceful. No violence! Remember, WE are the Party of Law & Order – respect the Law and our great men and women in Blue. Thank you!"

International media has expressed reservations on Trump’s long term future on social networking sites if he continues to post messages to cause hate and division in society.

Many people believe that he has been using these platforms to incite violence since he was elected the President.

They say that as long as he loses his presidentship, he might not enjoy the preferential treatment.