Cairo streets filled with a glitzy parade of 22 mummified pharaohs

Journalists capture as a vehicle carrying Pharaoh Ramesses II's mummy advances as part of a procession of 22 ancient Egyptian royal mummies leaving Cairo's Tahrir Square on their path to their new resting place at the new National Museum of Egyptian Civilization, on April 3, 2021. 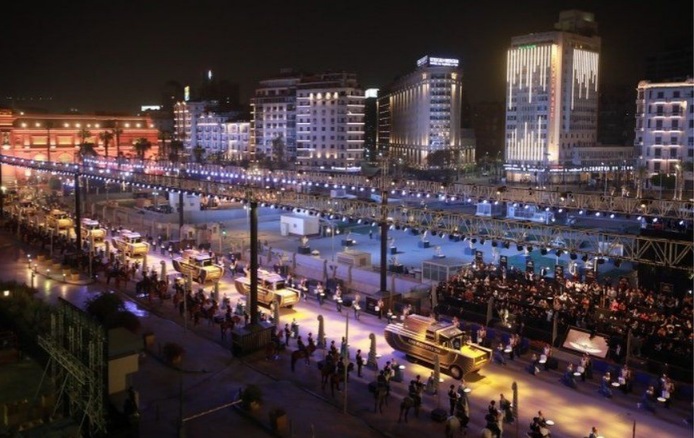 On April 3, twenty-two mummified kings and queens were paraded through Egypt's capital city of Cairo, each "float" resembling a glitzy war chariot. As per BBC News, the 18 kings and four queens were relocated from the Egyptian Museum in Tahrir Square to the new National Museum of Egyptian Civilization, about 3 miles (5 kilometres) away.

It was reported that the procession continued down the Nile, including royalty from the 17th to the 20th dynasties of ancient Egypt, which took place between 3,500 and 3,100 years ago.

Each mummy placed inside a nitrogen-filled box over a decorated vehicle adorned with shock absorbers; the nitrogen was meant to shield the mummies because exposure to oxygen would cause decomposition, as per BBC report. To reduce jostling, the parade route had also been repaved for the occasion.

Furthermore, the vehicles were arranged in the order of each ruler's reign, beginning with the 17th-century ruler Seqenenre Taa II, and including the famous pharaohs King Ramesses II and Queen Hatshepsut. The majority of the mummies were found in the late 1800s in modern-day Luxor, the site of ancient Egypt's capital, Thebes, which is home to the Valley of the Kings royal burial site.

"They've already seen a lot of movement in Cairo and before that in Thebes, where they were relocated from their own tombs to other sepulchres for protection," said Salima Ikram, professor of Egyptology at the American University in Cairo.

Archaeologist Zahi Hawass told the media that when the mummies were first transported from Thebes to Cairo in the nineteenth century, those transporting the preserved bodies had to fool customs officials by labelling the containers as "salted fish." The mummies were originally housed in the Bulaq Museum before being relocated to the Egyptian Museum in 1902, where they would remain until the parade on April 3, 2021.

Now, the mummies will be stored in the National Museum of Egyptian Civilization's Royal Hall of Mummies, and the show will open to the public on April 18, as per BBC News. Two of the 22 mummies, Queen Meritamun and Queen T, will be stored, but the rest will be on display.

"The new showroom resembles a one-way circular maze. The walls are all black, with spotlights shining on the mummies “The NMEC's spokesperson, Sayed Abu-El Fadal, told the media. "It's modelled after the tombs in the Valley of the Kings.”

Not all scholars accept that mummies should be displayed; instead, they argue that doing so desecrates the dead.