Bus Falls in Narmada From a Bridge, 12 bodies recovered: Apparently 40 passengers were travelling 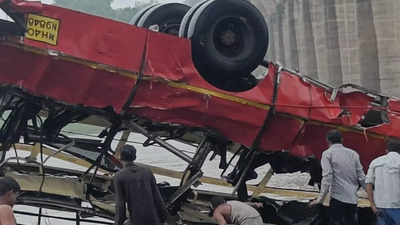 A major accident took place between Indore - Khargone in the Dhar district of Madhya Pradesh on Monday morning. The bus going from Indore to Pune fell into the Narmada river near Khalghat in Dhamnod at 10:45 am. There were 40 passengers including women and children on the bus. So far 12 bodies have been retrieved. Among them are the bodies of 7 men and 4 women. The identity of the dead is not yet known.

The bus went out of control while overtaking a vehicle on a two-lane bridge in Khalghat. The driver lost his balance and the bus fell into the river breaking the railing. As soon as the information about the accident was received, people around including Khalghat reached the spot. NDRF teams from Indore and Dhar have reached the spot. This bridge is said to be old. The bus belongs to Maharashtra State Transport. Taking cognizance of the incident, Chief Minister Shivraj Singh Chouhan has ordered the administration for rescue and relief work.

The accident happened on the Agra-Mumbai (AB Road) highway. This road connects Indore to Maharashtra. The place of occurrence is 80 km from Indore. The Sanjay Setu bridge from which the bus fell is built on the border of two districts- Dhar and Khargone. Half of the bridge is at Khalghat (Dhar) and a half at Khaltaka (Khargone). Collector and SP from Khargone have also reached the spot.