Bulldozers ran in Saharanpur and Kanpur, violence erupted in these cities of UP due to controversial statement

Violence erupted at many places in Uttar Pradesh including Prayagraj, and Saharanpur after the controversial statement of the BJP spokesperson on Prophet Mohammad. 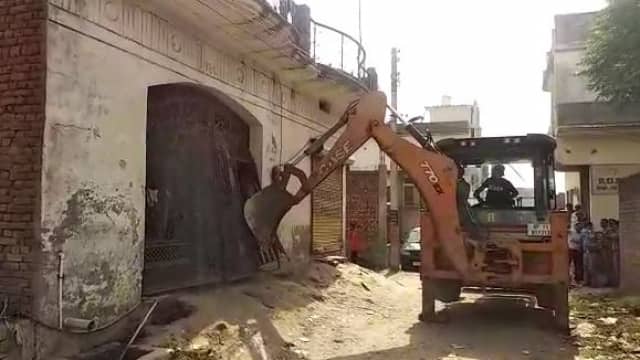 Saharanpur Bulldozer: After the violence that broke out in Uttar Pradesh on Friday, bulldozers have been run at the houses of the accused of violence and some people associated with them in Kanpur and Saharanpur. In the Saharanpur district of Uttar Pradesh, a bulldozer has been launched at the house of the accused who committed violence. UP Police says that illegal construction at the house of the accused has been demolished. On the action in Kanpur, the police officer says that the building in which the demolition has been done is a land mafia associated with the main accused of violence. So far 13 FIRs have been registered regarding the violence. Along with this, a total of 255 accused have been arrested. Violence erupted at many places in Uttar Pradesh including Prayagraj, Moradabad, Saharanpur, and Kanpur after the controversial statement of BJP spokesperson on Prophet Mohammad.

On the other hand, Uttar Pradesh Chief Minister Yogi Adityanath held a meeting with the police officers and district magistrates of the affected districts through video conferencing and took stock of the situation. He has given instructions for strict action against those involved in violence. Yogi said during the review meeting with the SP-DMs of the 6 affected districts, social media should be closely monitored. Proper coordination should be maintained with the local administration. If anyone takes the law into his own hands, then strict action should be taken against him immediately.

Apart from Saharanpur, the administration has brought down the illegal construction after a week of violence in Kanpur. This building has been demolished about three kilometers from the site of the incident. Police said that the owner of this building has a close relationship with the main accused of Kanpur violence and he is also involved in the conspiracy. Officials have confirmed this matter.