Bulldozer on terrorist's house in Kashmir, wall demolished in Kashmir

The terrorist was identified as Ghulam Nabi Khan alias Aamir Khan. Sources said Aamir is Hizbul's operational commander who had gone to PoK in the early 90s and is operating from there. 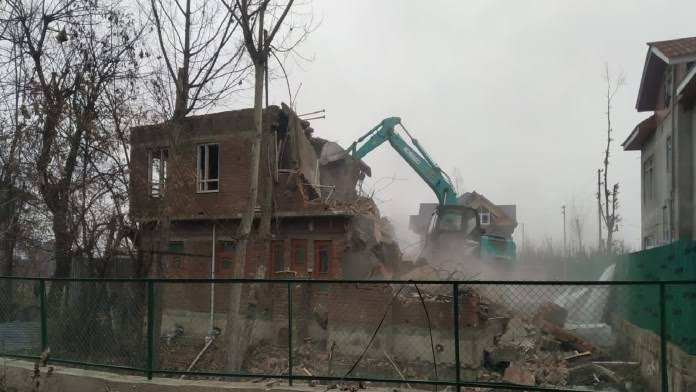 Action has been taken at the terrorist's house in Pahalgam area of ​​Anantnag district of South Kashmir. The authorities have demolished the outer wall of the Hizb-ul-Mujadeen terrorist's house built on government land by encroachment. The terrorist was identified as Ghulam Nabi Khan alias Aamir Khan. Sources said Aamir is Hizbul's operational commander who had gone to PoK in the early 90s and is operating from there.

In fact, Ghulam Nabi Khan, the commander of terrorist Hizbul Mujahideen (HM) on government land had built a wall and included it in the compound of his house. Acting on which the officials dropped it on Saturday in the liver of Anantnag district of Jammu and Kashmir. Explain that Ghulam Nabi Khan alias Saifullah Khalid alias Aamir Khan is the deputy of Hizbul chief Syed Salahuddin who is operating from PoK and has been declared a terrorist under UAPA.

Union Home Minister Amit Shah declared 4 people as terrorists in September, 2019 and 9 people in July, 2020 by invoking the amended provision to fight terrorism. Strengthening its policy of zero tolerance towards terrorism, the Modi government has declared several individuals as terrorists under the provisions of the UAPA Act 1967 (as amended in 2019). Under this, Ghulam Nabi Khan alias Saifullah Khalid alias Aamir Khan is declared a terrorist.

The operation is part of such efforts to dismantle the terrorist network and infrastructure in the Valley and break the backbone of the terrorist and his supporters. As per reports, the authorities are preparing a list of all such encroachments on government lands by anti-national elements who have grabbed these lands at gunpoint during the peak of militancy. This action gives a strong message to all such terrorist forces.