Bulldozer on Temple in Rajasthan: BJP calls it Revenge Politics while Congress accuses the BJP of Demolition

The video of JCB running on the pagoda in Rajgarh town is now going viral. Because of this, the matter has caught up. Officials are not saying much about the matter as of now. 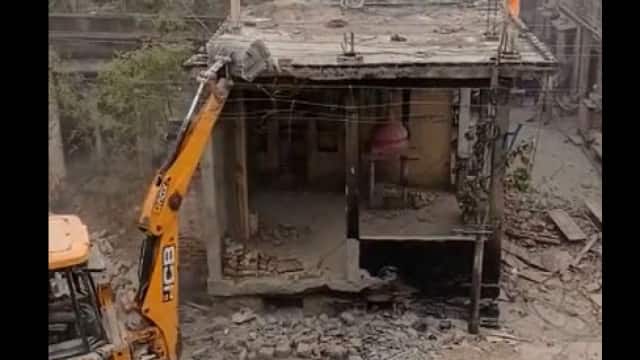 A dispute has started over the removal of encroachments during the widening of the road at Sarai roundabout in Alwar, Rajasthan. Bulldozers were also run on the 300-year-old temple that came on the way. In this action, the BJP has put the Congress government of Rajasthan in the dock. BJP says that it is not right to destroy the temple in the name of development. Congress is doing vendetta politics. At the same time, Congress has retaliated saying that there is a BJP board in Rajgarh Municipality and it has taken this action.

The video of JCB running on the pagoda in Rajgarh town is now going viral. Because of this, the matter has caught up. Officials are not saying much about the matter as of now.

The administration says that according to the master plan, action has been taken to remove the encroachment in Rajgarh. Over the years there had been a lot of encroachment. According to revenue records, there is a road of about 60 feet here. It didn't even survive 25 feet. Due to this encroachment has been removed from JCB.

Congress MLA Johri Lal Meena said that encroachment has been removed in Rajgarh town. There is a BJP board in the municipality here. That's why they can't say much. On the other hand, the Chairman of the Municipality Board says that this action has been taken at the level of administration. The administration says that the resolution has been passed at the level of the Municipality Board. Only then is the encroachment removed. In fact, in the master plan of 2012, it is a road of 60 feet. Action has been taken by referring to this master plan.