Breaking News : Train going from Jammu to Tatanagar derails near Aligarh, bogies are being separated

According to railway officials, the operation of trains in the down line between Ghaziabad and Aligarh has been completely stopped after the incident. Trains coming from behind are being diverted from another line. Simultaneously, the crashed bogie is being separated from the train. 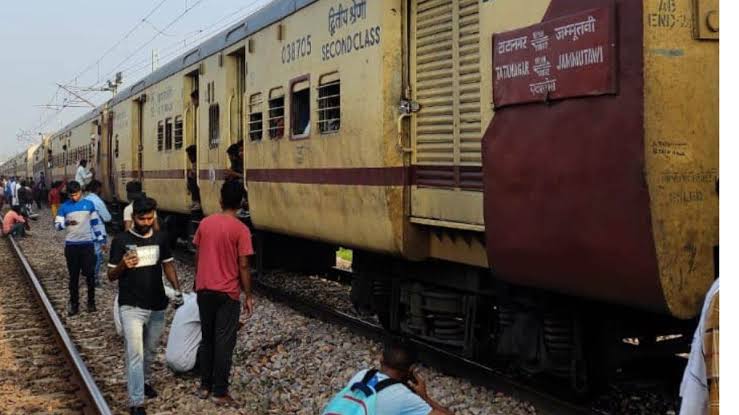 A bogie of Muri Express coming from Delhi to Aligarh derailed. Aligarh GRP team has been sent to the spot. Inspector GRP Subodh Kumar says that the S-7 box of the train was derailed due to the collision of the bull. The box has been separated. The train will leave from there in 15 minutes. This is the only train between Amritsar to Tatanagar route. Most of the Sikh family members go to visit the Golden Temple in this. Due to the accident, many trains coming and going at Aligarh Junction, NorthEast, Mahananda, Champaran etc. have been affected.

According to Inspector GRP Subodh Kumari, a bogie S-7 of Jammu Tawi Express derailed due to the impact of the bull. After this the train was stopped by applying emergency brake. The incident took place when the Jammu Tawi Tatanagar Express was passing through small stations Chipiyana Burjug, Maripat, Dadari, Bodaki, Ajaibpur, Dankaur, Fatehpur Makrandpur after leaving Ghaziabad station at the time of the incident. The speed of the train at the time of the incident was 40 to 50 kmph and was about to reach Aligarh station after 63 kms. After the derailment, the passengers sitting in the train were shocked. According to railway officials, no one has been injured so far.

According to railway officials, the operation of trains in the down line between Ghaziabad and Aligarh has been completely stopped after the incident. Trains coming from behind are being diverted from another line. Simultaneously, the crashed bogie is being separated from the train. Probably, if the coach is available, the train will be sent towards Tatanagar by installing a new coach. At the same time, passengers say that it was fortunate that the speed of the train was not high, due to which there was no major accident. At the same time, senior railway officials have ordered an inquiry into the accident. This train leaving from Jammu is scheduled to reach Tatanagar at 9:50 am on Wednesday.

When the passengers traveling in the train informed about the incident to their relatives living in Tatanagar, they are also worried and they are praying to God to return safely.