Sohail Khan and her wife Seema have called it quits after a 25-year-old marriage. 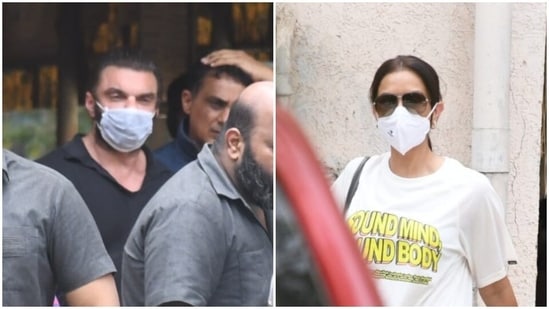 Actor-director Sohail Khan, brother of Bollywood superstar Salman Khan, and his wife Seema are getting divorced after 24 years of marriage. On Friday, both were spotted outside the family court in Mumbai. During this, both looked like friends. After filing for divorce in the BKC family court, both of them sat in their respective cars and left for home. Photos of both have since then gone viral on social media.

According to media reports, a source in the family court said, 'Sohail Khan and Seema Khan were present in the court today. Both have filed for divorce. However, no official announcement has been made about this from both sides so far. It is being said that everything was not going well between the two for a long time.

Sohail and Seema had eloped and married in 1998. Seema hails from Delhi and went to Mumbai to pursue a career in fashion design. Meanwhile, Seema and Sohail had their first meeting. According to Sohail, he had fallen in love with Seema at first sight. Soon both of them started dating each other. This couple wanted to get married, but Seema's family was not ready for this marriage at all.

Seema belongs to a Punjabi family. Before marriage, her name was Seema Sachdev. His father is Arjun Sachdev. Seema's brother Bunty Sachdev is the founder of Cornerstone Sports and Entertainment. Due to family protests, the day Sohail's film 'Pyaar Kiya To Darna Kya' (1998) was released, both of them ran away from home and got married in Arya Samaj temple. Later both of their families accepted this relationship. This couple had also married. The couple has two sons Nirvaan Khan and Yohan Khan.