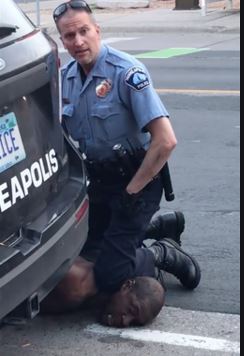 One of the blackest day in the history of Unites States of America was that of George Flyod who was being handcuffed and then knelt on with knees by cop Derek Chauvin, till Floyd went unconscious and breathless after nine minutes of struggle. This happened on May 25, 2020.

The gory incident took America by its collar, with Black Lives Matter (BLM) movement, that has also supposedly contributed to the uprooting of its President Donald Trump quite unceremoniously. Trump has been allegedly and often making remarks against skinned residents of the US, on various occasions.

The case, handed over to the courts has been investigating the truth on the basis of the camera records available and with people who knew Flyod. In this sequel, an ex-sergeant David Pleoger was investigated. He said, in a video-recorded statement that the cop Derek Chauvin “Shouldn't Have Knelt On Floyd After He Stopped Resisting”. Derek was a supervisor in the city's 3rd Precinct on May 25, 2020, when the incident had happened.

The supervisor was asked for his opinion on whether it was appropriate to use a force to kneel down an accused, Pleoger answered the prosecutors in negative, which is important. He said, "When Mr. Floyd was no longer offering up any resistance to the officers, they could have ended the restraint." He also confirmed that kneeling is a use of force, and that the restraint "should stop" once a subject "is handcuffed and no longer resisting."

Notably, Derek Chauvin also “failed to immediately tell the supervisor that he'd knelt on Floyd's neck while restraining him during a police investigation - waiting more than 30 minutes until he stood outside the hospital emergency room where Floyd remained unresponsive to disclose the information” a report says.

Pleoger also testified that he had called Chauvin after getting a call from a concerned 911 dispatcher who was watching a city security camera and saw a policeman holding Floyd on the ground.

Chauvin is charged with “second and third-degree murder and second-degree manslaughter after he knelt on Floyd's neck for nine minutes and 29 seconds as the man begged for his life, cried out for breath and ultimately went limp,” as the media reports record.

The camera footage also show three more officers at the scene of the incident, namely Thao, Thomas Lane and Alexander Kueng, they are also “charged with aiding and abetting murder and manslaughter”.

They are scheduled to face a trial in August this year.

Meanwhile a Minneapolis court has recently been shown a disturbing new police bodycam footage of George Floyd pleading with officers during his arrest, saying: "I'm not a bad guy".

Also certain footage of Flyod in a food store have come out before the crime took place.