Shah remarked, “It is not just a manifesto but a resolution letter for West Bengal by the country’s largest party.” 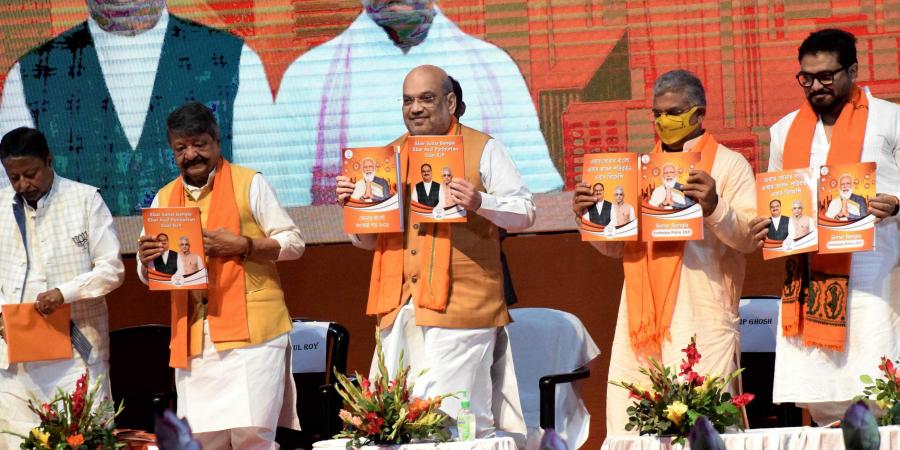 The Bhartiya Janata Party’s ambitious manifesto was released by Union Home Minister Amit Shah, the manifesto is named ‘Sankalp Patra’, Shah remarked on it, “It is not just a manifesto but a resolution letter for West Bengal by the country’s largest party.” He added, “The core idea of this manifesto is building a Sonar Bangla. For centuries, Bengal led the country on several fronts - spiritually, science, politics, social reforms, education or art. Bengal used to be ahead in every sector.”

‘Sankalp Patra’ pledges that every fisherman will receive Rs 6,000 per year, "just like our farmers". The farmers are promised an addition of Rs 4000 to the amount they already receive from the Centre, making them a sum of Rs 10,000 if the BJP comes to power. Shah stated, "Continuing PM Kisan Samman Nidhi Yojana, ₹18,000, which Mamata didi didn't give to farmers for 3 years, would be transferred to 75 lakh farmers' bank accounts without any cut."

The manifesto also stresses on women safety in the state, promising of 33% reservation in State government jobs to women along with free education from’ KG to PG’.

On the topic of employment, BJP will initiate a Common Eligibility Test for all State Government jobs as a measure to curb corruption. "Inaction for years has broken dreams of the youth and has stopped the flow of employment. In the last 10 years, TMC's ill-governance has started a dark chapter in Bengal's history," said Shah.

Addressing the Citizenship Amendment Act, Shah announced that it will be introduced in the first Cabinet, and refugees who have been living in West Bengal for 70 years will be granted citizenship, as well as a stipend of Rs 10,000 annually for a period of five years for each refugee family.No infiltrators will be permitted in West Bengal, according to the BJP's manifesto, and border fencing will be improved.

Shah informed that the BJP would work on getting Bengali recognition as an official language at the United Nations. He added, “We will establish a Sonar Bangla fund worth ₹11,000 crores which will promote art, literature and other such sectors.” The manifesto also makes a promise to build three new AIIMS hospitals in North Bengal, Jangalmahal and Sundarban.

Elections to the 294-member State Assembly will be held in eight stages, beginning on 27th of April and ending on 29th of April, while the votes will be tabulated on 2nd of May.