While the transition was easier for some, such as Mukul Roy, a prominent Trinamool lieutenant who defected to the BJP before the 2019 general elections, it was a very different issue for many of the party's foot soldiers. 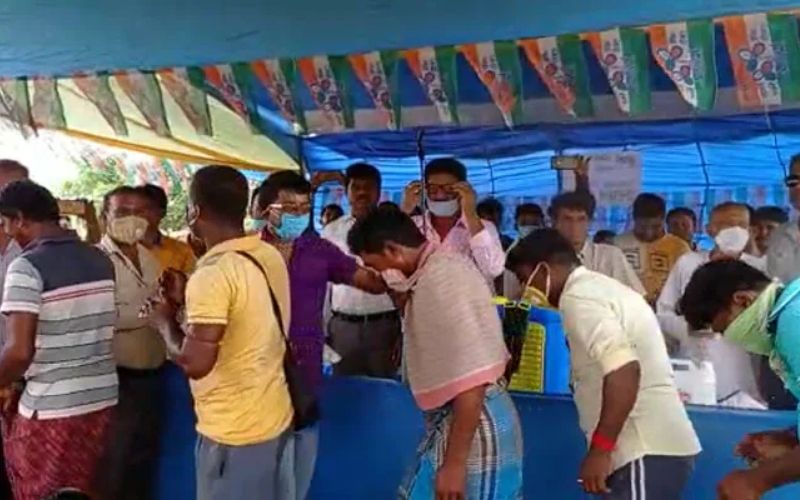 It's a real walk of shame for BJP workers in West Bengal who are seeking to convert back to their former party Trinamool Congress following the state election results in May, from having to shave their hair to being sprayed with sanitiser.

While the transition was easier for some, such as Mukul Roy, a prominent Trinamool lieutenant who defected to the BJP before the 2019 general elections, it was a very different issue for many of the party's foot soldiers.

Those who have been let back in have been observed enduring heinous tests of loyalty and prostrating themselves to appease the powers that be.

The move was condemned by BJP Rajya Sabha MP Swapan Dasgupta, who regained his place in the higher chamber of parliament following an unsuccessful run in state elections.

He compared the public humiliation to that of 1960s China. On Thursday, 150 BJP volunteers in the Birhum district were extensively doused with sanitiser before being handed the Trinamool banner.

The event's organiser, a local party official, stated that he "intended to sanitise the BJP bug out of these folks." After confidently stating that it will win more than 200 of West Bengal's 294 constituencies, CM Mamata Banerjee's Trinamool Congress limited the BJP to less than 80 seats in the March-April polls.

Ever since, numerous Trinamool defectors, including Mukul Roy, have indicated an interest in rejoining Mamata Banerjee's team.

Though the Trinamool has been sluggish and cautious in allowing the turncoats back in, Banerjee stated, rather cryptically, during Roy's homecoming ceremony, "More will come."

According to sources, the Trinamool is keen to "strike while the iron is hot" and sever a part of the BJP, preferably a larger slice than the one that left the Trinamool prior to the election.